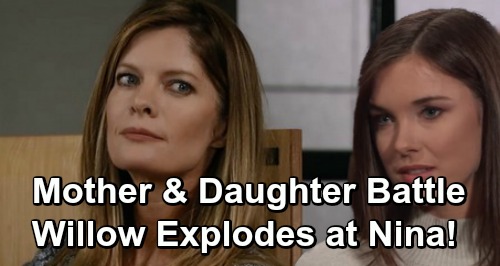 General Hospital (GH) spoilers tease that Willow Tait’s (Katelyn MacMullen) feud with Nina Reeves (Michelle Stafford) may get worse before it gets better. Things got awfully heated when Willow thought she was leaving town. She had nothing left to lose, so she blew her top and made sure Nina knew she was a horrible stepmother.

Of course, Willow was forced to do damage control after she changed her mind and decided to stick around. Nina and Valentin Cassadine (James Patrick Stuart) were furious enough to demand Willow’s firing, but she managed to keep her job and promised not to lash out again. However, Willow will soon break that promise. Who can blame her when Nina’s always there to push her buttons?

During the week of May 13-17, General Hospital spoilers say Nina will get on Willow’s last nerve. Willow won’t be able to take it anymore, so she’ll snap. It hopefully won’t happen in a classroom setting this time and it probably won’t involve Nina’s parenting skills, but it’ll still bring drama. Willow will end up barking at Nina over something, but Nina should bark right back.

Nina has no idea what Willow’s up against, so she can’t truly understand. Although Nina’s been overly defensive of Charlotte Cassadine (Scarlett Fernandez), her annoying behavior is nothing compared to Shiloh Archer (Coby Ryan McLaughlin) and the threat he poses. The guy’s a real menace and Willow has every reason to be afraid.

Willow fears the baby she believes is her son will be discovered and confiscated by Shiloh. Nina is the least of her problems since an intimidating cult leader is lurking in town. That’s especially true since Shiloh’s so determined to pull Willow back into Dawn of Day.

It’s easy for GH fans to see why Willow will explode, but oblivious Nina won’t have the full picture. Will things change for her once she does? Michael Corinthos (Chad Duell) might be able to help Nina see the light, even if it’s in a vague way that protects Willow’s secrets.

He should be in Nina’s orbit more often now that he’s growing closer to Sasha Gilmore (Sofia Mattsson), so that’s a possibility to consider.

Regardless, General Hospital spoilers say Nina and Willow’s war will erupt, but it’ll hopefully lead to better communication down the road. Since Willow is likely Nina’s real daughter, they’ll have to put their issues aside eventually. Cynthia Watros will make her Nina debut sooner or later, so GH will have a chance to continue this twisty storyline.

Are you eager to see Willow and Nina find common ground? Are you enjoying the conflict instead? We’ll give you updates as other GH news comes in. Stay tuned to the ABC soap and don’t forget to check CDL often for the latest General Hospital spoilers, updates and news.