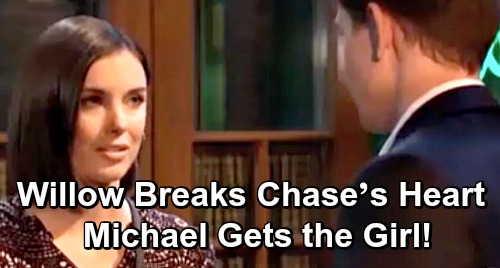 General Hospital (GH) spoilers tease that some romantic shakeups may be brewing in Port Charles. Every warm interaction between Willow Tait (Katelyn MacMullen) and Michael Corinthos (Chad Duell) brings them closer. If Michael had only had the guts to make his move sooner, he’d probably already be Willow’s main squeeze.

However, Harrison Chase (Josh Swickard) was quick to scoop Willow up for himself. He’s still quite smitten, but it’s growing increasingly obvious that GH is headed for a Michael and Willow pairing. How they can not after all this bonding? Many General Hospital fans have actually grown to love Chase and Willow together, so this might be disappointing news. Nevertheless, it looks like it’s happening.

Of course, relationships tend to come back around on soaps. A breakup is by no means a permanent thing. Just ask one of the many couples who’ve broken up more times than they can count! There’s always a chance Willow and Chase will find their way back to each other after the seemingly inevitable split ahead. Still, we have to consider what a breakup would be mean for these two.

Willow would naturally be paired with Michael, which could set up them possibly raising Jonah Corinthos together when the truth comes out. What about Chase? General Hospital may have a goal in mind for him as well. Dante Falconeri (Dominic Zamprogna) warned Lulu Falconeri (Emme Rylan) not to wait on him when he left for deprogramming. He doesn’t have faith that he can return in a reasonable period of time.

Lulu will hold out hope as long as she can, but Emme Rylan will surely get another love story to play eventually. Chase makes sense as a good option if Willow’s with Michael. General Hospital has made sure to keep Chase and Lulu in each other’s orbit occasionally. They’re not exceptionally close yet, but it’s not like they’re total strangers either.

That could give Lulu and Chase somewhere to go down the road. GH has clearly chem tested them in case the day comes when they’ll be paired up. With Dante gone indefinitely and Willow drifting toward Michael, that day may come sooner than anyone thought!

Could you get behind Chase and Lulu as a couple? Would you rather see Chase stick with Willow instead? Who do you want as a love interest for Lulu? We’ll give you updates as other GH details emerge. Stay tuned to the ABC soap and don’t forget to check CDL often for the latest General Hospital spoilers, updates and news.