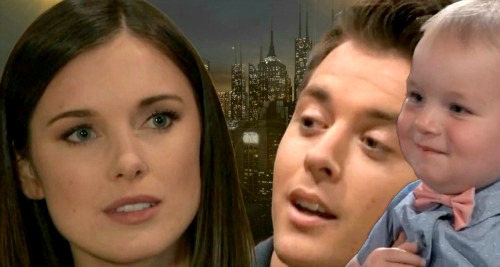 General Hospital (GH) spoilers reveal Nelle Benson (Chloe Lanier) just got crucial news from Harmony Miller (Inga Cadranel), but she gave Harmony some crucial puzzle pieces in return. Harmony was taken aback to learn her grandson was born on the same day as Nelle’s “dead” baby. She quickly moved past it, but it could certainly be something that comes into play later.

Nelle nearly slipped up due to her shock over the name “Wiley.” She covered that it was just a nice name, but that could be something else Harmony thinks back on later. Even Nelle’s extreme concern over the situation could be a red flag. Harmony likes Nelle, but she’s probably seen shades of the real Nelle as her cellmate. Nelle doesn’t usually care about anybody except herself.

General Hospital spoilers say it’s doubtful Harmony will put it all together and blab. She’s not an important enough character in the baby swap story. However, we have to remember who Harmony’s connected to. Willow was the one who first told Michael Corinthos (Chad Duell) that Nelle was Harmony’s cellmate at Pentonville. She appreciates the changes she’s seen in her mother and will undoubtedly return to visit.

What else does Harmony have to talk about besides Nelle? She can ask questions about Shiloh Archer (Coby Ryan McLaughlin) and what’s on the outside, but she’s living in a little Nelle bubble right now. Harmony could easily mention the weird coincidence of Nelle’s baby being born on the same day.

If Willow grows curious and pushes for more, Harmony might admit that Nelle’s behavior was kind of odd come to think of it. Harmony spilled the Shiloh-Wiley connection to Nelle, but was that the only purpose of her being Nelle’s cellmate? Perhaps General Hospital has a bigger purpose in mind. She could tip Willow off to trouble and put her on the path to the truth.

Since Willow’s also friends with Michael, she might bring up Nelle and try to learn more about her. Michael could easily rant about the extent of Nelle’s manipulation. He might even mention that Nelle was friends with Brad Cooper (Parry Shen) at one point. It’d be a reasonable thing for Michael to point out since Brad is now raising “Wiley” with Lucas Jones (Ryan Carnes).

Brad has been popping antacids like candy and acting like the world’s on fire for a year now. His suspicious behavior was going on long before he learned Shiloh was Wiley’s birth father. Could the puzzle start coming together for Willow? She’d be the ideal person to crack the case in terms of drama.

Can you imagine Willow dealing with the devastating blow of knowing her son is dead – then realizing she has the power to reunite Michael with the son he believes is gone forever? It would be a wild and deeply emotional moment.

General Hospital has always made Willow a take charge kind of gal, so it’d be great to see her step up and make this right. It would break her heart to destroy Lucas’ world, but she’d have to tell Michael the truth. She’s seen his suffering and cares too much to let this go. If GH intends to push Michael and Willow together romantically, this would be a perfect setup.

Do you think Willow will solve the baby swap mystery? Would you like to see Michael get this shocking news from Willow? We’ll give you updates as other GH details emerge. Stay tuned to the ABC soap and don’t forget to check CDL often for the latest General Hospital spoilers, updates and news.