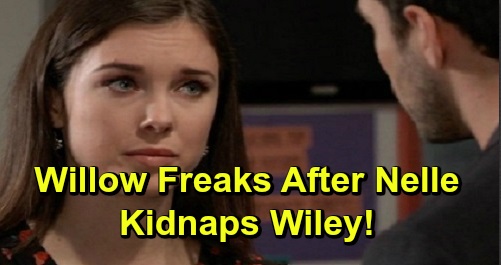 General Hospital (GH) spoilers tease that trouble could be headed Willow Tait’s (Katelyn MacMullen) way. GH fans know that Nelle Benson (Chloe Lanier) was Harmony Miller’s (Inga Cadranel) cellmate for a while. Nelle got the scoop on Willow and “Wiley Cooper-Jones” (Erik and Theo Olson) from Harmony for a while, but now Nelle’s bunking with Sam McCall (Kelly Monaco). She’s also hoping to score an early release like Harmony – and it just might happen with Martin Gray’s (Michael E. Knight) help.

Even if Martin can’t get Nelle out of Pentonville legally, she could take matters into her own hands and escape. Clearly, Pentonville’s security is pretty lax. Ryan Chamberlain (Jon Lindstrom) is constantly left alone to attack other inmates, so it’s not hard to believe that Nelle could sneak out. She might get desperate enough to make a break for it.

Either way, this storyline would be pointless if Nelle didn’t end up on the outside. GH is obviously building toward a scenario where Nelle is indeed free – whether it’s legal or part of a grand escape plan. That brings us to what Nelle wants. In fact, it brings us to what Nelle’s always wanted: to keep Michael Corinthos (Chad Duell) and his family away from her son.

General Hospital viewers will recall that was Nelle’s baby swap motive. If the swap’s exposed or Nelle fears it will be soon, she’ll undoubtedly take drastic action. The last thing Nelle wants is Michael getting Jonah Corinthos back.

Plus, Nelle has made it clear that she wants to be in the kid’s life. When Brad Cooper (Parry Shen) met with Nelle and became nervous about her plans, Nelle assured him that “Wiley” would be fine. Brad naturally wanted to know what that meant, but Nelle simply called for the guard and suggested they were done. She didn’t want to elaborate, but this is Nelle we’re talking about. Whatever she’s cooking up can’t be good!

In the episode that aired December 16, Harrison Chase (Josh Swickard) potentially offered an interesting clue. During a chat with Hamilton Finn (Michael Easton), Chase talked about everything Willow was dealing with. After Finn brought up Nelle’s incident and trip to GH, he assumed that must’ve added to the stress.

“Not for Willow and me,” Chase said. “Thankfully, she doesn’t even know what Nelle looks like.” Hmm…that’s an intriguing thing for GH to focus on. Why specifically point out that Willow doesn’t know that? It seems like a huge tipoff that Nelle’s going to use that to her advantage down the road.

It’s easy to imagine Willow babysitting “Wiley” and bonding with Nelle, who could “bump into” her and insist she gave a child up for adoption, too. Nelle could even mention that they both share backgrounds in working with kids. She could have Willow believing they’re besties in no time!

Nelle could earn Willow’s trust and offer to watch “Wiley” if Willow has to step away for a moment. Could that be how Nelle will kidnap “Wiley” after her prison release or escape? If so, Willow may end up guilt-ridden and in total panic mode.