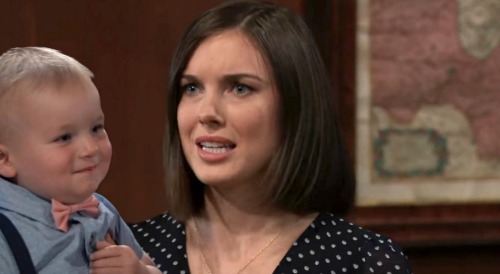 General Hospital (GH) spoilers tease that Willow Tait (Katelyn MacMullen) is set to face a devastating blow. Ever since Willow found out she was pregnant and escaped from Dawn of Day, she’s made it her life’s mission to protect her baby. Nothing matters more than keeping her son safe and as far away from Shiloh Archer (Coby Ryan McLaughlin) as possible.

Of course, Willow’s goal hasn’t been easy for many reasons. One of those reasons is how hard it was to give her child up for adoption. Willow felt like a fraud for attending those bereavement group meetings, but there was nowhere else she could turn. She had to find some way to process the pain of giving Wiley up for his own good.

However, Willow doesn’t know she had every right to be at those bereavement group meetings. Her son with Shiloh died the night he came from the hospital with Brad Cooper (Parry Shen). General Hospital spoilers say it won’t be long until Willow learns the real story – or at least part of it. Some new info points to Willow potentially discovering this crushing shocker.

On July 11, Willow will take the first step down a healing path. How could she do that if she was still worried about Wiley? Willow can’t put Shiloh and Dawn of Day behind her completely until she gets resolution on her son.

After all, a DNA test will inevitably come at some point. Brad loves “Wiley” and hopefully wouldn’t risk changing it to buy time. Even if they were to lose “Wiley,” it’d be cruel and ridiculous for Brad to gamble on letting “Wiley” end up with a cult leader. Instead, Brad may have to confess the modified version of events he told Julian Jerome (William deVry).

Regardless, General Hospital spoilers say Willow will experience devastation sooner or later. It was hard to give Wiley up, but now Willow believes she’s seen him happy and healthy. She hasn’t really gotten to know “Wiley,” but she’s interacted with him and likes knowing he’s with parents who love him.

All of that will shatter once Willow realizes her child is dead and gone. GH spoilers state that Kevin Collins (Jon Lindstrom) will get other new patients soon, so maybe Willow will be one of them. Neil Byrne (Joe Flanigan) makes more sense considering his background in cults, but perhaps Willow will be looking for an outsider’s perspective. Besides, this will really about dealing with her Wiley grief.

General Hospital fans won’t want to miss the next phase of this story. We’ll give you updates as other GH news comes in. Stay tuned to the ABC soap and don’t forget to check CDL often for the latest General Hospital spoilers, updates and news.