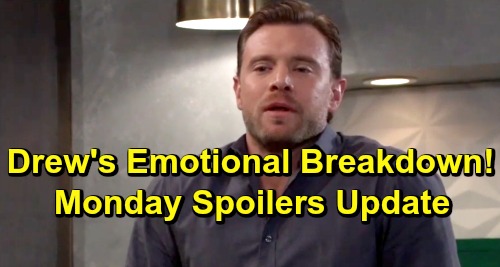 General Hospital (GH) spoilers update for Monday, July 1, tease that Jason Morgan (Steve Burton) will battle some fears. He won’t want Sam McCall (Kelly Monaco) dragged into any more Shiloh Archer (Coby Ryan McLaughlin) trouble, but she’ll push Jason to let her take care of it. Sam knows how to handle herself, so she won’t want Jason to fret.

Besides, Sam and Jason deserve a chance to concentrate on their love. They’ll spend some time reconnecting in Monday’s episode, so that should be good for their relationship. Meanwhile, Shiloh will be confident about the custody battle that’s brewing. He’ll get on the phone with his attorney and insist he knows where to find his son. Shiloh won’t have DNA proof yet, but he’ll figure out where to find it – or so he thinks!

“Wiley Cooper-Jones” isn’t really Shiloh’s kid, but the cult leader will remain in the dark on that tidbit for now. Brad Cooper (Parry Shen) will naturally leave Michael Corinthos (Chad Duell) out of the loop as well. When Brad runs into true “baby daddy” Michael, he’ll admit keeping “Wiley” may be easier said than done. Brad will secretly plan to get some passports from Julian Jerome (William deVry) – just in case!

Other General Hospital spoilers say Harrison Chase (Josh Swickard) will step up for Willow Tait’s (Katelyn MacMullen). Now that Mac Scorpio (John J. York) has taken over as the interim police commissioner, Chase will let him know the situation. He’ll fill Mac in on what a horrible guy Shiloh is and contend that Willow’s desperate to keep her child away from him.

Mac will understand why Willow’s so intent on stopping Shiloh’s custody fight. He’ll see what he can do to help Willow out, so Chase will appreciate that. Elsewhere, Maxie Jones (Kristen Storms) will deal with some drama. It doesn’t look like this will have anything to do with the hunt for Dante Falconeri (Dominic Zamprogna), but it’ll still leave Maxie with a problem to solve.

Maxie will talk to Lulu Falconeri (Emme Rylan) about this rotten dilemma, so maybe they’ll put their heads together and figure out a solution. As for Laura Webber (Genie Francis), she’ll think she’s found a solution as well.

Laura will decide she should pitch in on the Dante search by seeking some help. She’ll turn to Robert Scorpio (Tristan Rogers) and urge him to bring her daughter’s husband home.

General Hospital spoilers say Robert may express concern, but Laura will think this is what’s best for Lulu. She’ll long to see Lulu happy with Dante again, so she’ll count on Robert’s connections to make it happen. GH fans can also expect Robert to become the new DA soon. It turns out Robert went to law school, so he’ll be qualified to take over this surprising position in the week ahead.

Finally, Drew Cain (Billy Miller) will have an opportunity to share his pain. He’s been showing great strength for Kim Nero’s (Tamara Braun) sake, but his heart’s shattered over Oscar Nero Quartermaine’s (Garren Stitt) death, too. Drew will confide his sorrow on Monday, so perhaps Curtis Ashford (Donnell Turner) will lend a sympathetic ear.

Some gripping scenes are on the way, so don’t miss all the action. We’ll give you updates as other GH news comes in. Stick with the ABC soap and don’t forget to check CDL often for the latest General Hospital spoilers, updates and news.