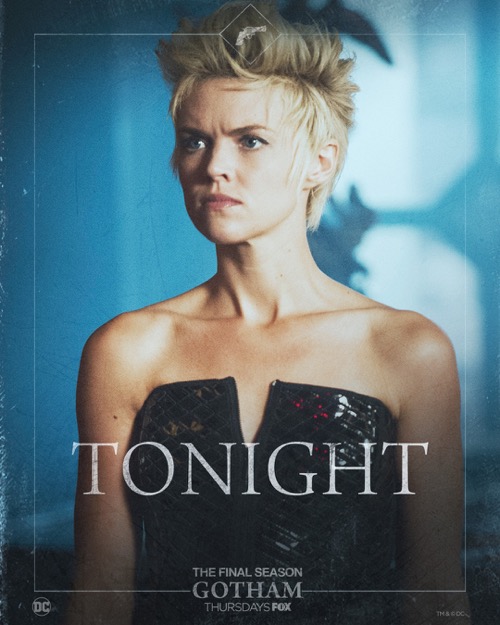 Tonight on FOX Gotham continues with an all new Thursday, January 24, 2019, called, “Ruin” and we have your Gotham recap below for you. On tonight’s episode as per the FOX synopsis, “An anticipated Ex arrival ignites a battle royale when long simmering tensions finally explode. Farrah butts into other people’s business pushing the house into further chaos.”

Haven was bombed. The whole building blew and countless died, but Barbara couldn’t go through with killing Penguin. She had her gun on him and could have taken the shot. Only Barbara figured enough people had died that day. She left the scene of the explosion and she left Penguin for another day. It seems he was still needed to answer questions. Gordon wanted to know if the gangs brought in the bombs and Penguin said he didn’t know. He didn’t recall any of the gangs had enough weapons to take down the building and he sure as hell didn’t bring them in. Penguin had no idea who was behind the bombing and neither did Gordon. He wanted to know who would kill women and children. And he realized his greatest allies in this were his former enemies.

Gordon first reached out to Barbara because she was all about protecting women. She kept those in her own territory safe by throwing men out after a certain period and as far as she knew she could be next. Therefore, Barbara had already put out feelers. She had learned that a shady guy was hanging out around Haven just before blew and she passed the information onto Gordon when he came to see her. Barbara also reassured Gordon that she hadn’t been behind the bombing. She understands how it would look like her and how Gordon may have even suspected her though she had been there when the bombs and she said she would never have been a part of something as horrible as that.

Gordon even received aid from Penguin. Penguin had handed over serious weapons and a ton of ammunition he knew the police needed. It has been proven how easy it was to overrun them and so Penguin claimed he didn’t want that to happen again, but the truth was he liked being a hero. It was better liked when he was the hero and so Penguin also wanted to go with them as they routed out the criminal. The cops had gotten a tip that the bomber was out by the warehouses and they wanted to in quietly. They hadn’t wanted to tip off the bomber and so no one was counting on Penguin being Penguin. He used a bullhorn to announce their presence and told the guy to hand himself over.

The criminal chose to shoot out the bullhorn and so that’s when the police announced that they had this guy surrounded. It made no sense to resist, but the guy in the building shouted back that he really feels like turning himself in and so that’s when everyone realizes it was Zsasz. Zsasz was his same spunky self. This time, on the other hand, he was innocent. He claimed that he hadn’t bombed the building and, when Penguin demanded how could they ever take his word, Zsasz replied that he would never take credit for someone else’s word. He then got in a tit for tat because Zsasz had betrayed Penguin once upon a time and so Zsasz told his old cohort that he should have let the Sofia Falcone thing go by now.

Gordon used the boys’ spat to maneuver around Zsasz and he was able to arrest the wanted man. But Zsasz actually was telling the truth. He hadn’t bombed the building and Lucius Fox found evidence of it. He was asked to investigate the bombing and had recruited the Riddler to help determine the origin of the bomb. He and everybody else had assumed that the bomb was detonated at the building by someone that left not long before. Someone like Zsasz who by the way said he only went to the building to pick up peaches. Anyways, Lucius and old Edward Nygma determine that the building was the bomb. It had been set off when someone threw an incendiary device at the boiler system and so it had to be someone at the scene that did it.

This rules out Zsasz and that was enough for the police, but not for Penguin. Penguin said that the people of Gotham had a right to determine if Zsasz was guilty and then used his men to force the police to hand over Zsasz. Zsasz was going to be put through a sham trial and there was nothing the police could do to stop it. They knew that couldn’t risk turning the anger back onto themselves and so they tried let the trial play out. Except Penguin brought Gordon’s name into it. Gordon had to respond and he ended up telling the crowd what really happened. He told them that someone shot an RPG from the rooftop of a neighboring building and it set of the boiler system. It hadn’t been a bomb and it couldn’t have been Zsasz if he was last seen on the ground. And while he tried to appeal to everyone better nature, it was Penguin that riled them up again.

The crowd voted to execute Victor Zsasz and so Gordon and Harvey had to break him out. They got Zsasz out of the building and they tested his supposed badassness. He couldn’t raise his gun against Gordon and Gordon used that to say that Gotham and its people could still be saved. It hadn’t mattered to some of Gordon’s people because they went over to join Penguin when they couldn’t take Gordon’s principles. And so he had been nursing a drink when Barbara came to see him with a new tip, and with both of them being angry at Penguin they couldn’t help falling back into some of their more romantic patterns.

Riddler or Ed as Lucius calls him had continued to investigate who had fired that RPG and he found a witness in the next building, but that old lady remembered that it was the Riddler that killed those people and so he had been forced to kill the elderly woman because he didn’t want anyone to know what he did or that he couldn’t remember his actions on his own.

And Selina found the Joker and ended up killing him, but Bruce could see that didn’t make things better for Selina.