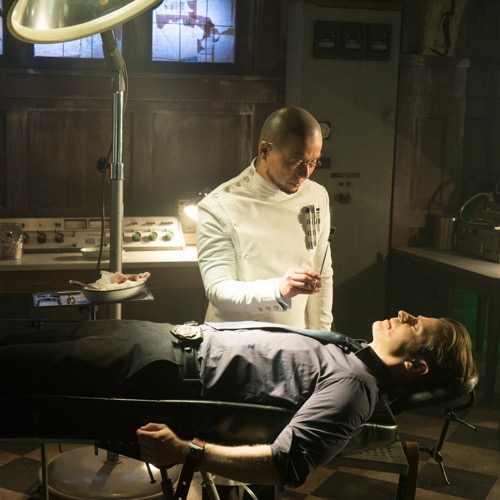 Tonight on FOX Gotham continues with an all new Thursday, March 14, 2019, called, “I Am Bane” and we have your Gotham recap below for you. On tonight’s episode as per the FOX synopsis, “On the precipice of Gotham’s reunification, Gordon and Bruce face a newly transformed Eduardo, and discover the real mastermind behind the city’s current chaos. Meanwhile, a pregnant Barbara turns to Lee for help.”

The mainland sent in a General. This General was supposed to test the toxicity around Gotham and it was his job to determine whether or not reunification was possible for both Gotham and rest of the United States. The government didn’t want to take a chance on an outlaw city and have that experiment fail. They wanted some guarantees in place and running their own tests were a part of that, but the general was one of the good guys. He found out that Gordon was telling the truth and that the level of toxicity had gone down. He was even willing to sign off on reunification right then and there. The general had just congratulated Gordon for a job well-done when they were attacked. Eduardo Dorrance came back to finish his mission of destroying Gotham and to do that he had to kidnap Bruce and Gordon.

Our two good guys were knocked out and dragged to a different location where they finally met Walker. Walker was the one that had set everything in motion. She had contacted Gordon a while back over the wireless and told him help was going to come, but then she sent in Dorrance and they bombed Haven. She didn’t want reunification and so meeting her gave the guys the chance to ask why. Why kill so many people? Why destroy Gotham’s chances? Walker confessed that her name really wasn’t Amanda Walker. She said she goes by another name and that Bruce knew it. Bruce also knew why she was doing all that she could to destroy his city and so he just needed to put the pieces together. Bruce needed to look into her eyes and realized that she got them from her father. She was the daughter of Ra’s al Ghul.

Walker’s real name is Nyssa al Ghul. She was part of her father’s League of Shadows and she wanted to avenge him. He may have died, but his followers still believed in carrying out his mission and destroying a city for the greater good of the world. It was what Nyssa believed and it what she used to indoctrinate Dorrance. Dorrance had been severely injured following his fight with Gordon and so he had been taken to Professor Strange. He was experimented and forced to become Bane. He gained his new name because Nyssa said he would be the bane of all of their enemies. It this newly invigorated man that kidnapped Gordon and Bruce from a heavily armed GCPD territory and it had been him sent after Barbara. Barbara had also played a part in Ra’s death and unfortunately, she couldn’t protect herself against a monster because she was in labor.

Barbara’s labor began before she could get on the submarine. She was going to go have her baby and then rush back to the submarine in order to flee before reunification, but then she went into labor and she knew she couldn’t trust her counterparts. Penguin and Ed would have left her behind and so Barbara ensured they couldn’t leave without her. She took a much-needed valve that the sub needed to work and she hid it. Barbara said she would reveal the location of the part after she’s given birth and that they couldn’t torture because nothing hurts more than childbirth. So she really was the one in control. Barbara was telling them that she was going with them after the birth when again Bane decided to interrupt someone.

Bane came to the hospital. He wanted to get his hands on Barbara and that wasn’t something either Lee or the guys were going to allow. They were all protecting her for their own reasons, but one way or another they were going to get her out of that hospital. The guys said they’d hold off this Bane and they tried. They set off some explosives and didn’t think any living thing could have survived that. Only Bane wasn’t even slowed down. He walks right through the explosion and continued looking for Barbara. Barbara, on the other hand, was being pushed in a wheelchair by Lee and also firing on anyone that tried to get in her way. Luckily, she was still a pretty good shot even while in labor and so Barbara was doing a great job at protecting herself as well as Lee.

There was just one drawback. Ed and Penguin found the part Barbara stole and they decided to make a run for it. They were going to leave Bane for the women to handle, but Barbara couldn’t shoot anymore because she finally reached the last stage of childbirth as in she was ready to push. Barbara and Lee quickly realized they couldn’t wait on an ambulance to come get them and so they found a place to hide. They hid long enough for Barbara to give birth to a healthy little girl. It had been a special moment that it had made Barbara finally appreciative of Lee and so they had bonded. Lee also told her that they would never take her daughter away from her and it was a promise that Barbara knew she would keep. And just when she realized she didn’t have to go on the run anymore, that’s when they were found.

Bane had found them and he was going to hurt Barbara. The only thing that stopped him had been the fact that alarm had gone up. Bruce and Gordon had got away and so they sent Alfred after the baby and he came with Selina. The two of them put the baby and the ladies in the car, but then they tried to take Bane themselves and sadly they were no match for him. Bane got through them and he went after Barbara.

Meanwhile, Gordon and Bruce took a “chipped” General back to his men, but they were blindsided when the General (under mind control) had given the order that all of Gotham be destroyed.