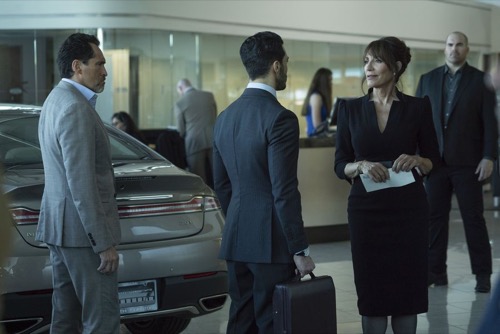 Tonight on ABC, Grand Hotel airs with an all-new episode Monday, August 12, 2019 episode and we have your Grand Hotel recap below. On tonight’s Grand Hotel season 1 episode 9 called, “Groom Service,” as per the ABC synopsis, “Danny struggles to keep his relationship with Alicia from her family; Gigi discovers the secrets that Santiago has been keeping from her; and Felix continues to try and make his way back into Gigi’s life.”

Detectives are talking to Santiago when Gigi arrives. He tells them he had nothing to do with the accident. After they leave Gigi tells him to get out. He had Mateo’s people do something bad and she knows it. She tells him to find another bed to sleep in for the night.

Danny and Alicia continue to meet up. She thinks she needs to tell her family. He likes being in their own little bubble.

Ingrid arrives back on work. Jason isn’t too happy to see her. Meanwhile, Santiago and the family are having breakfast. Carolina and Yoli come only to steal food for their dad they are hiding away in a hotel room.

In the lobby, Jason sees the detectives who he spoke with months back about Sky’s disappearance. Alicia meets with a couple getting married at the hotel. The groom warns her that his husband to be is a bridezilla.

Javi is sitting with his new therapist to talk about his addiction. Meanwhile, Santiago tells Mateo he wants to talk to his boss. Mateo tells him no.

Gigi and her girls are having a “girls night.” They bring up their dad. Gigi doesn’t have anything good to say about him.

Helen comes into the linen closet and finds Ingrid sleeping in there. She begs not to be fired. Helen takes her home. Jason isn’t happy. Helen tells him it will only be for a week.

Jason and Alicia almost get caught in a backroom. Meanwhile, Gigi’s ex has a hat on roaming the lobby looking for Gigi. Gigi is across the hotel talking to Santiago about his lies and secrets.  Just as Gigi’s ex is about to knock on the door to Gigi’s room, Yoli stops him.

Helen is in the lobby with the detectives who are telling her they are going to interview all of the employees that where there the night of the accident.

Alicia answers the door to her bridezilla in lingerie, thinking it was going to be Danny. They both scream. They get to talking and begin to understand one another more. It inspires her to tell Danny she wants to be open with their relationship. Danny has his doubts. He tells her. She gets upset.

Santiago meets with Mateo’s boss – a very cold, cut-throat businesswoman. He wants out. She explains that she was just about to help him with the building collapse.

Ingrid makes the family dinner. They all try to choke it down. Danny dodges the detectives who think they have seen him somewhere before. They confuse him for a pizza delivery guy.

Gigi comes face to face with her ex in the spa. He tells her he has missed her. She punches him out. After he comes to he tells her that Santiago wronged him and that is why he had to go on the run. Santiago has always had his eye on Gigi.

Javi asks Alicia if maybe their mother was an addict. They both think about it in silence. Meanwhile, Mateo meets with his boss. They talk about Santiago and how he knows who she is now. Later, Gigi tests Santiago, bringing up her ex. He admits someone turned Felix into the FBI.

Danny runs into the female detective in the hotel elevator. She tells him she knows who is he is that her partner may have been behind his sister’s case being closed without a resolution. She wants to help him.

Jason finally stops being mean to Ingrid. He brings her lunch with an apology. Meanwhile, Mateo is attacked in the hotel stairwell. Alicia brings Danny to family breakfast. They all seem very nice to him. He is happy. Downstairs, Heather his ex checks in.