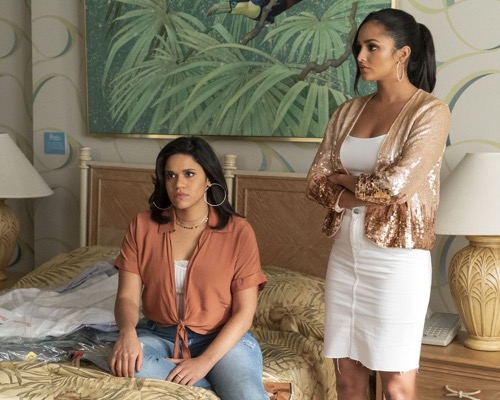 Tonight on ABC, Grand Hotel airs with an all-new episode Monday, August 19, 2019 episode and we have your Grand Hotel recap below. On tonight’s Grand Hotel season 1 episode 10 called, “Suite Little Lies,” as per the ABC synopsis, “Santiago and Gigi’s relationship is on the mend after secrets they have been keeping from each other are revealed.

Danny teams up with the police to try and figure out what happened to Sky, and Javi takes on a new hobby.”

Mateo is brought to Theresa his powerful boss in the trunk of a car. She demands his loyalty and also wants to hear about anything happening in the hotel. She threatens Ingrid if he doesn’t cooperate along with his life.

Danny and Alicia are glowing with happiness as they walk the lobby. Meanwhile, Heather, Danny’s ex, is waiting at the front for him. Santiago heads to pick up Javi from rehab. Gigi heads off to see her friends. Ingrid is on to someone stealing toiletries. It’s Felix, Gigi’s ex. She reports it to Helen who is spooked. Heather is waiting for Danny when he arrives at his new table. She explains that they were together for 2 years. They can’t just break up over the phone. He tells her to go home.

Helen interrupts Javi’s homecoming to tell Santiago there has been activity in the hotel room 606. Meanwhile, Gigi, Felix, and the girls are all in the room. Felix and the girls are talking about the good times. Gigi is softening to his charms and the good ole times when Santiago and Mateo come into the room.

Santiago and Gigi fight back in their residence. She cannot believe he blew the whistle on Felix so long ago, ripping her family apart. Now he wants to call the police and get her girls in trouble for harboring a felon.

Alicia runs into a crying Heather who is trying to get out of her booking. She tells Alicia how her ex ripped her heart apart. Alicia doesn’t know who her ex is but she wants to help. She’ll comp the room.

Mateo calls Theresa about Felix. Meanwhile, Javi apologizes to Jason for trying to punch him when he was drunk previously.

Yoli tells Marissa about her dad being in the hotel. Marissa doesn’t want to know anything about it.

Danny helps Alicia create a romantic guest room for Heather and her ex to fix their problems. She tells Danny about the poor woman’s story. He rushes her out of the room and right into Heather. Both are confused. Alicia runs off. He chases her. She tells him she doesn’t trust him.

Gigi warns Felix he needs to leave. He offers to take the girls. Gigi is irate. He also wants to take her. She is married to Santiago, she tells him.

Javi tries to help Jason gets laid but Jason isn’t having it.

Santiago comes home to Theresa and Mateo. She offers to forgive his debt if he hands Felix over.

Danny asks Heather not to tell Alicia about his connection to Sky. Meanwhile, Mateo introduces Theresa to Helen and Jason. Helen knows exactly who she is.

Yoli tells Marissa about her plans to travel with her dad. She invites Marissa who doesn’t want to go and wants nothing to do with it all.

Helen and Alicia talk about Danny. She tells Alicia how he faked his whole resume. Meanwhile, Santiago asks Felix where all the money he stole is. Felix tells him he lost it. They mix words about Gigi and Santiago’s late wife. Santiago attacks him.

Ingrid and Javi finally come face to face. He thinks it would be best if they stayed clear of one another.

Jason finally talks to a beautiful woman he has been eyeing. Gigi confronts Santiago about handing Felix over to Theresa. Marissa confesses to Yoli that she is undocumented.

Danny shows the officer he has been meeting with a photo of Theresa. The officer knows all about her and her organized crime. Danny wonders if Sky is still alive somewhere.

Ingrid asks Helen to remove her from her duties on Javi and Mateo’s floors. Ingrid sees Jason coming out of a woman’s room. Gigi helps get Felix out of the hotel. He says goodbye to the girls.

Jason tells Danny about his Heather problems. Theresa tells Santiago Felix may be gone but she loves the hotel and wants an office there.

Danny comes clean to Alicia. She fires him!