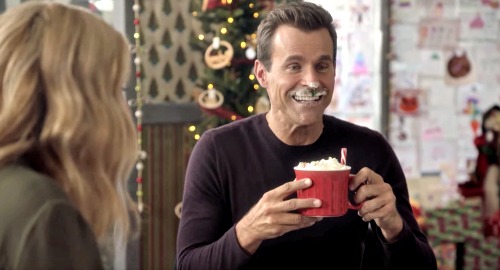 Hallmark Channel news has some great information to pass on about a new holiday movie starring a veteran and fan-favorite All My Children soap actor. Cameron Mathison, who portrayed Ryan Lavery on All My Children from 1997-2011, will be starring in “The Christmas Club” which premieres on Wednesday, November 27 at 8pm Eastern.

“The Christmas Club” is based on the novel by Barbara Hinske and is about two busy strangers who haven’t found love in a long time. They meet when they help an elderly woman find her lost Christmas savings. Thanks to fate and Christmas magic, they also find something they were both missing – true love.

Cameron plays the lead role of Edward in the movie. About his role, he says: “Edward meets Olivia through a series of random acts of kindness and a lite bit of Christmas miracle. [The movie] includes fate, and second chances.”

And in the lead role of Olivia is Elizabeth Mitchell, who has an impressive list of TV appearances. She’s starred in the TV series Lost and The Expanse among others. She’s also appeared in numerous feature films, including Gia, Witch Hunt, and The Santa Clause trilogy.

Cameron Mathison has kept busy since his All My Children days. He is currently the co-host of Hallmark Home & Family alongside Debbie Matenopoulos, and he’s also the co-anchor of the weekend edition of Entertainment Tonight. He’s also appeared in numerous Hallmark Channel movies, including the Murder, She Baked series.

Barbara Hinske, the author of the novel “The Christmas Club,” couldn’t be more pleased that her book is coming to life on The Hallmark Channel. Back in July, she posted a note on her website about the movie. “All – I couldn’t contain myself – dreams do come true! I couldn’t be more excited and pleased with the casting. They’ve made it a current day setting and I think I’m going to love their changes.”