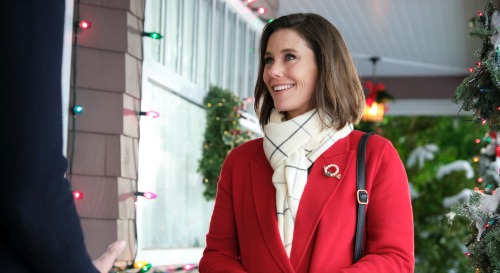 Hallmark Channel news has some great information to pass on about a holiday movie premiering this weekend on the Hallmark Mysteries & Movies Channel. As you might know, the channel is in the midst of its Miracles of Christmas movie fest, and there’s a brand-new premiere this Saturday, November 23 at 9pm Eastern when the movie “Holiday Hearts” airs for the first time.

Fans of romantic holiday movies won’t want to miss this one. It stars Ashley Williams in the lead female role, whom you might remember from the TV series Good Morning Miami, Saving Grace, and How I Met Your Mother. She was also on As The World Turns years ago, playing Meg Ryan’s daughter on the series. Ashley has also produced several movies for The Hallmark Channel herself.

Also starring in “Holiday Hearts” is Paul Campbell in the lead male role. You might recognize Paul from his roles in the TV series Battlestar Galactia and Knight Rider. He’s also had starring roles in several Hallmark Channel movies, including A Godwink Christmas, Surprised By Love, and The Last Bridesmaid.

So, what’s “Holiday Hearts” all about? It’s a story about a woman named Peyton (played by Ashley Williams) and a doctor named Ben (played by Paul Campbell) who come together to look after their best friend’s daughter, Lilly (played by Peyton Lepinski), after he winds up in the hospital at Christmastime. Peyton and Ben play house with Lily for a week and cross off all the holiday traditions on her list.

As Ashley Williams explains, “They get to see Christmas in a whole new way because they can see the world through Lily’s eyes. It’s what draws our two lead characters together, is being able to see Christmas as if they were children.”

“We’ve got to look after this little girl. We have to make this the best, most magical Christmas for her,” Paul Campbell says. “It’s such an incredibly sweet story, and it is so steeped in Christmas from the very first frame to the very last frame. There isn’t a moment that doesn’t feel like your dream Christmas.”

“Holiday Hearts” was written by Barbara Ankrum and is based on the novel by Susan Brightbill. Allan Harmon directs.

Fans of romantic and family-themed Christmas movies aren’t going to want to miss this one. Will you be watching “Holiday Hearts?” Enjoy all your Hallmark Channel holiday movies and don’t forget to check CDL often for the latest Hallmark Channel News.