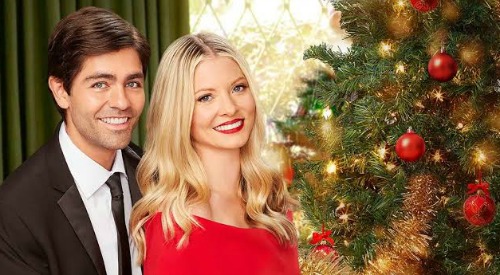 Hallmark Channel news has some great information to pass on about a movie that will premiere the weekend of November 23 that you won’t want to miss. Elvis fans in particular will be excited about this premiere, as the movie is titled “Christmas at Graceland: Home For The Holidays” and will co-star Priscilla Presley, who appears as herself in the movie.

The movie stars Kaitlin Doubleday in the lead female role. Kaitlin has appeared in the TV series Empire and Nashville, as well as in the major motion picture Catch Me If You Can alongside Leonardo DiCaprio.

In the lead male role will be Adrian Grenier, who you may remember from the HBO series Entourage. He’s also recently appeared in the feature films Trash Fire, as well as Marauders, which also starred Bruce Willis and Christopher Meloni.

“Christmas At Graceland: Home For The Holidays” is about a world traveler named Harper (played by Kaitlin Doubleday) who returns home to Memphis to be with her family for the holidays. While she awaits news about a job overseas, she takes a job as a nanny for a wealthy widower named Owen (played by Adrian Grenier). Owen is very rigid with his children’s schedules and Harper encourages him to break out of his routine and spend more family time.

Harper and Owen end up helping to prepare an “Elvis at Christmas” exhibit and a fundraiser for Owen’s company at Graceland. Over time the two develop feeling for each other, and Harper realizes how much she likes living near her family. Ultimately, she must decide if her home for the holidays will end up being her forever home.

The movie has a little of everything – romance, love, singing, kids, Christmas, and Elivs! Speaking of the singing part, country singer Chase Bryant has a role in the movie. He portrays himself and performs “Blue Christmas” among other Christmas carols.

It sounds like it will be a great Christmas love story, with a little something for everyone. “Christmas at Graceland: Home For The Holidays” premieres on The Hallmark Channel on Saturday, November 23 at 8pm Eastern.

This definitely sounds like a movie not to be missed. Will you be watching “Christmas at Graceland: Home For The Holidays?” Enjoy all your Hallmark Channel holiday movies and don’t forget to check CDL often for the latest Hallmark Channel News.