BY hellodrdavis on November 16, 2019 | Comments: one comment
Related : Hallmark Channel 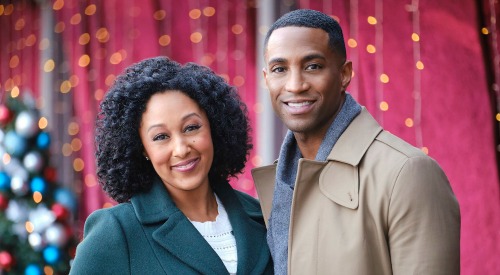 Hallmark Channel news has some great information to pass on about a new Christmas movie that’s airing tonight, Saturday, November 16, on the Hallmark Movies & Mysteries Channel. The movie stars Brooks Darnell, who portrayed Nate Hastings on The Young and the Restless.

As Y&R fans know, the role of Nate is now being played by Sean Dominic, but it looks like Brooks has kept busy since leaving Y&R. His new movie for the Hallmark Movies & Mysteries Channel is called “A Christmas Miracle” and can be seen this evening, Saturday, November 16th, at 7pm Eastern.

The movie also stars Tamera Mowry-Housley, who also served as executive producer. She’s best known for her role in the hit show Sister, Sister alongside her twin sister Tia Mowry-Hardrict. Tamera has also appeared in Strong Medicine and Roommates, and she is a co-host of the syndicated talk show, The Real.

The movie also features Barry Bostwick, whom you may recognize from his numerous films, including Weekend At Bernie’s II, Hannah Montana: The Movie, and The Rocky Horror Picture Show.

The movie is about single mom named Emma (player by Tamera Mowry-Housley) who is on the hunt for a Christmas miracle to write about for the lifestyle magazine she works for. As she follows a lead on the story, she finds unexpected romance with a jaded photographer named Marcus (played by Brooks Darnell) and takes it upon herself to bring about a Christmas miracle for a lonely street musician (played by Barry Bostwick).

Brooks recently spoke with Essence magazine and had the following to say about his role in the movie: “What I really love about Marcus is that he compliments everything that is good and bad about Tamera’s character Emma. I end up becoming a father figure [for her son] and I think that’s what I enjoyed the most about it. I became a positive influence on her life, as well as her son’s life.”

He also had great things to say about his costar, Tamera. “I grew up watching her and her sister, so I did know of her. Her personality is exactly what you see; it’s exactly how she is. She is genuinely a positive person and I think that’s the dynamic that works so well and the viewers will see it in the movie. We were laughing before the takes, we were laughing during the filming, and we were laughing after.”

It sounds like viewers are in for a treat with “A Christmas Miracle.” Will you be watching? Enjoy all your Hallmark Channel holiday movies and don’t forget to check CDL often for the latest Hallmark Channel News.