BY hellodrdavis on November 15, 2019 | Comments: one comment
Related : Hallmark Channel 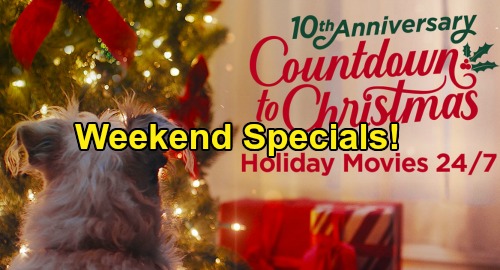 First, the Hallmark Channel will premiere “Picture A Perfect Christmas” on Saturday, November 16th at 6pm Eastern. The movie stars Merritt Patterson, whom you might recognize from the ABC Family series “Ravenswood,” and Jon Cor. Jon has appeared in the Syfy Channel’s “Dark Matter.”

The movie is about a photographer (played by Merritt Patterson) who goes home for Christmas to care for her grandmother. While there, she winds up lending a helping hand to her grandmother’s handsome neighbor (played by Jon Cor) who needs help watching his nephew. Romance ensues and the two end up discovering the true meaning of family.

Christmas Under The Stars

Second, look for the premiere of “Christmas Under The Stars” on Saturday, November 16th at 8pm Eastern. The movie stars Passions alum Jesse Metcalfe in the lead male role as well as Autumn Reeser in the lead female role. This will be Autumn’s tenth original Hallmark Channel movie! The movie also stars Clarke Peters.

The movie is about Nick (played by Jessie Metcalfe), who’s a self-centered investment banker who gets fired shortly before Christmas. He ends up taking a job at a Christmas tree lot that’s owned by a warmhearted widower (played by Clarke Peters). While working there, he meets Julie (played by Autumn Reeser), who’s an astronomy teacher who has always looked to the stars for hope. The Christmas spirit ultimately takes over Nick and he falls for Julie and discovers the joy of helping others.

Finally, you can catch the premiere of “Write Before Christmas” on Sunday, November 17 at 8pm Eastern. The movie stars Chicago Med’s Torrey DeVitto and One Tree Hill’s Chad Michael Murray in the lead roles, and also stars Grant Show and Lolita Davidovich.

The movie is about Jessica (playoff by Torrey DeVitto), who is recently single and sends Christmas cards to people who have made a difference in her life – the aunt who raised her, her younger brother in the military, a pop star who provided the soundtrack to her life, the music teacher who inspired her, and her best friend. As each person receives their card, they are each sparked to make a difference in their own lives. Along the way she meets Luke (played by Chad Michael Murray), and romance occurs.

It looks like it will be a great weekend for feel-good Christmas movies! Will you be watching? Enjoy all your Hallmark Channel holiday movies and don’t forget to check CDL often for the latest Hallmark Channel News.