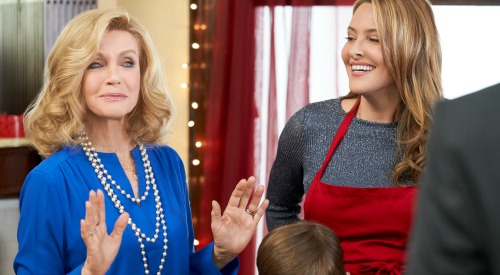 Hallmark Channel news has some great info to pass on about a former General Hosptial star. Donna Mills, who portrayed Madeline Reeves on the ABC soap, will be starring in an upcoming holiday movie for The Hallmark Channel to air this coming weekend, November 17.

The movie is called “Christmas Wishes & Mistletoe Kisses” and is scheduled to premiere on Sunday, November 17 at 10:03pm Eastern on The Hallmark Channel. Donna plays the part of Caroline Sinclair in the film, who is the mother of main character Nick Sinclair who is played by Matthew Davis. The film also stars Jill Wagner as Abbey Fuller.

The movie is part of the Hallmark Channel’s Countdown To Christmas, which is currently celebrating its 10th anniversary. The movie is based on the 2015 book by the same title by author Jenny Hale.

The movie is about a woman named Abbey, who’s an interior designer and beautiful single mom. Shortly before Christmas, Abbey is hired to decorate the mansion of handsome businessman Nick. According to the movie’s official longline, she “must break down the wall between her and Nick, all while keeping the holiday spirit alive.”

Donna Mills was recently interviewed by Hallmark Home & Family, and she revealed that she plays a meddling mother in the movie who wants her son to marry Abbey. According to Donna, the character of Abbey “is an interior designer and event planner sort of person, and I want him [her son in the movie] to use her for his home that he’s doing and he’s all involved in work and is not really interested, but I persist.”

Donna also had good things to say about her costars. Of Jill Wagner, who plays Abbey, Donna said, “What a dear person she is, and the fact that she lives on a farm in Tennessee, and she’s just so real and grounded, I love her.” Donna went on: “I loved them all. It was really fun and we shot in Atlanta, which I’ve never shot in before and that was fun.”

“Christmas Wishes & Mistletoe Kisses” sounds like a great, feel-good holiday film. Will you be watching? Enjoy all your Hallmark Channel holiday movies and  don’t forget to check CDL often for the latest Hallmark Channel News!