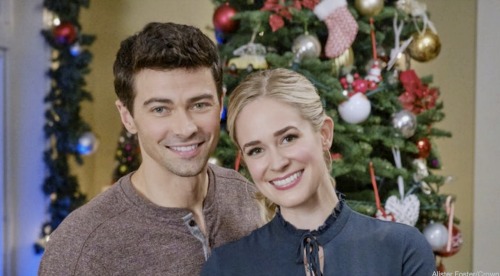 General Hospital (GH) spoilers has some great news to pass on about a former GH star. Matt Cohen, who portrayed Griffin Munro on the ABC soap, has a new upcoming film. Matt was last seen on GH back in March of 2019, when his character exited Port Charles after falling into a depression after the murder of his girlfriend Kiki Jerome (Hayley Erin).

Matt’s new movie is called “Holiday Date” and will be seen on the Hallmark Channel. It’s part of Hallmark’s Countdown to Christmas movie series, which is in its tenth year, and will premiere on Saturday, December 14 at 8pm Eastern.

Matt plays the role of “Joel” in the film, alongside Brittany Bristow in the lead role of “Brooke.” The film also stars Teryl Rothery and Bruce Boxleitner as Brooke’s parents.

“Holiday Date” is about an aspiring fashion designer named Brooke who gets dumped just before Christmas. Dreading going back home single, she asks Joel, who’s an actor, to assume the role of her boyfriend as a ruse for her family.

Well, as it turns out, Joel is Jewish and has never celebrated Christmas, but Brooke’s family decides to be inclusive and celebrate both Christmas and Hanukkah. Brooke and Joel get closer as they share their traditions, but eventually Brooke’s ex-boyfriend comes into the picture and meets Joel face to face.

Through a series of events, this leads Brooke’s family to grow suspicious of her relationship with Joel, and eventually the couple must decide whether to keep up the relationship charade or come clean about their lie.

As you might know, “Holiday Date” isn’t all that Matt has been up to as of late. He’s recently joined Entertainment Tonight as a full-time correspondent and co-anchor of ET’s weekend programming. He had served as a guest correspondent in the past before accepting the full-time role.

At any rate, “Holiday Date” sounds like a great holiday movie, so be sure to check it out. Will you be watching? Stay tuned to GH and don’t forget to check CDL often for the latest General Hospital spoilers, updates, and news.