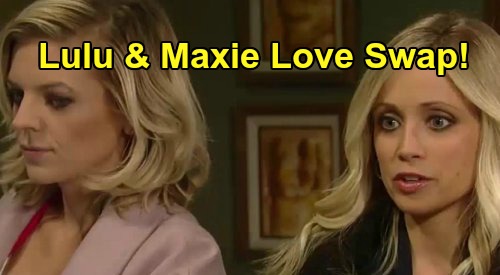 General Hospital (GH) spoilers tease that Peter August’s (Wes Ramsey) relationship with Maxie Jones’ (Kirsten Storms) is set to crash and burn. He’s keeping some huge secrets from Maxie and has done some dark things to prevent those secrets from getting out. Peter’s the reason Andre Maddox (Anthony Montgomery) was stabbed multiple times. He would’ve finished Andre off if he hadn’t ultimately feared getting caught at GH.

After all, General Hospital has consistently tried to show Peter’s softer side. Remember how he offered support to hospitalized Wyatt Hoover (Patrick J. Gibbons Jr.), the Raging Raccoon troop member? The show always tries to show Peter being nice to kids and having compassion in certain moments. They want to highlight the fact that Peter’s not all bad – just like when he reassured Lulu Spencer (Emme Rylan) during Charlotte Cassadine’s (Scarlett Fernandez) latest crisis.

That could mean Peter will ultimately stick around and be paired with someone else. Many GH fans have never been all that thrilled about Maxie and Peter as a couple, so there’s really no need to keep that going. It’s possible Maxie will forgive Peter in time, but maybe General Hospital will go for another pairing instead.

Could Lulu be an option? She has a close friendship with Peter through her work at The Invader. You’d think Lulu would side firmly in Maxie’s corner since they’re besties, but we all know their rivalry erupts every now and then. There are have definitely been times when GH seemed to be testing the waters with Peter and Lulu, so it’s worth considering the idea of a partner swap.

Maxie has repeated commented on Dustin’s attractiveness – so much so that she actually refers to him by his nickname, “Hot Dustin.” Could Maxie end up falling for Dustin down the road? Will she wind up with Dustin while Lulu gets paired up with Peter? It’s an intriguing possibility that could provide some good drama for Lulu and Maxie.

What do you think the future holds for Maxie and Lulu? Could you see GH pairing Peter with Lulu after “Paxie’s” destruction? Could Maxie eventually find “Hot Dustin” too hot to resist? General Hospital spoilers say some excitement’s ahead no matter what, so stay tuned. We’ll give you updates as other GH news comes in. Stick with the ABC soap and don’t forget to check CDL often for the latest General Hospital spoilers, updates and news.