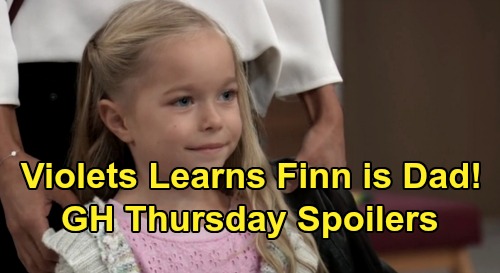 General Hospital (GH) spoilers for Thursday, November 14, tease that some hot drama’s brewing. Due to impeachment hearing coverage, GH is pushing back the episode that was originally supposed to air on Wednesday, November 15. That episode will now air on Thursday, so let’s dive in and see what’s happening.

For starters, Finn Hamilton (Michael Easton) will let his little girl in on some heartwarming news. With Hayden Barnes (Rebecca Budig) by his side, Finn will tell Violet Barnes (Jophielle Love) that he’s her dad. Violet will be excited and will wonder if this means Finn loves her. Finn will insist he loves Violet more than he ever thought possible. After Violet asks, Finn will also confirm that Roxy’s her sister now. It sounds like GH fans are in for sure cute moments!

Over with Anna Devane (Finola Hughes), she’ll share some nice moments with Valentin Cassadine (James Patrick Stuart) as well. Valentin will be grateful for Anna’s help in saving Charlotte and will enjoy a relieved reunion with his daughter. Unfortunately, Charlotte won’t want to go home with Lulu Spencer (Emme Rylan). She’ll snap at her mom and insist on going back to Wyndemere instead.

Charlotte will later tell Valentin and Nina Reeves (Cynthia Watros) a secret. She’ll explain that Cassandra Pierce (Jessica Tuck) threatened to have Nina sent to jail if she didn’t cooperate. Nina will argue that Charlotte should never put herself at risk like that, but Charlotte will counter that she knew it would be OK once Cassandra called her papa.

Afterward, Lulu and Laura Webber (Genie Francis) will join Valentin, Nina and Charlotte at Wyndemere. When the adults suggest sitting down for a snack together, Charlotte will gripe about them putting on a show. She’ll think it’s crystal clear they don’t get along, so Valentin and Lulu will chat about doing better for Charlotte’s sake.

Meanwhile, Charlotte will confide in Laura. She’ll admit she saw a man who later disappeared on the pier. Charlotte will confess that she’d never seen him before, so it seems she doesn’t recognize Nikolas Cassadine (Marcus Coloma) from any pictures. Nikolas will have to be more careful though – which is exactly what Jasper “Jax” Jacks (Ingo Rademacher) will warn him about on Thursday.

General Hospital spoilers say Jax will get a visit from Jordan Ashford (Briana Nicole Henry), who’ll surprise Jax by revealing that Cassandra was blown up on the boat. Jax will assure Jordan he knows nothing, but she won’t seem satisfied by the answers she’s getting. Once Jordan’s gone, Jax will rip into Nikolas and accuse him of planting the bomb. Nikolas will promise he’s innocent in the matter and will put the blame on Valentin.

As for Carly Corinthos (Laura Wright), she’ll leave Josslyn Jacks (Eden McCoy) puzzled over this whole Jax move-in issue. Carly will allude to a situation Jax is dealing with, but she’ll do her best to ease Joss’ mind. When Josslyn seems concerned, Carly will suggest it’s just some work drama.

At Shadybrook, Sonny Corinthos (Maurice Benard) will bring Ava Jerome (Maura West) a special visitor. Ava will be pleased to see Avery Corinthos (Ava and Grace Scarola). After their visit wraps up, a nurse will bring some meds and leave Ava looking suspicious. Trina Robinson (Sydney Mikayla) will drop by eventually and fill Ava in on her punishment, which prevents her from going to the gallery. Ava will insist that’s fine before she calls Trina by the name “Kiki.”

Back with Anna, she’ll catch up with Robert Scorpio (Tristan Rogers). Robert will face interruptions as he tries to tell Anna about Finn’s daughter with Hayden. However, Anna will confirm she knows Hayden’s back in Port Charles. She’ll be eager to surprise Finn, so she’ll decide to head home.

Next, Robert will drop the daughter bomb on Harrison Chase (Josh Swickard), who’ll be hurt that his brother didn’t divulge it. Since Finn’s still adjusting the new himself, Robert will defend him. At home, Anna will walk in and find Finn looking awfully cozy on the sofa with Hayden – who’ll be wearing Finn’s shirt after sleeping over.

General Hospital spoilers say Anna will definitely be rattled by the sight of “Fayden” together. The same goes for stunned Finn and Hayden! Violet will be off playing elsewhere when Anna arrives, so that shocker’s still to come.

Once Sonny returns to Carly, she’ll raise red flags by suggesting they need to be more accommodating to Jax. Carly will eventually lie and argue that Jax may be seeing someone. She’ll use that as the reason Josslyn can’t move in, but Sonny will think it sounds like Carly has a problem with it.