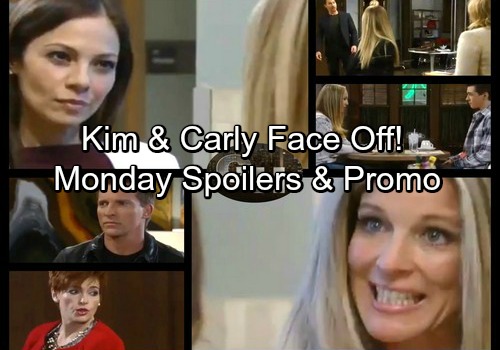 General Hospital (GH) spoilers for Monday, January 15, tease that Diane (Carolyn Hennesy) will grow suspicious of Sonny (Maurice Benard) and Jason (Steve Burton). She’ll push them to tell her what they’ve been up to. Jason and Sonny might as well come clean about their latest plan. They’re working with Spinelli (Bradford Anderson) to draw the traitor out of hiding and progress has been made.

Spin sent an email to the manuscript writer and it seems pretty clear that Peter (Wes Ramsey) opened it. General Hospital spoilers say Peter may get spooked as he ponders who knows his secret. Nevertheless, he’ll have other projects to focus on. Peter will return to Nina’s (Michelle Stafford) office, where Maxie (Kirsten Storms) will still be ripping into Lulu (Emme Rylan).

Nathan (Ryan Paevey) changed his mind about publishing the interview, but Lulu couldn’t fix it in time. It’s not her fault that Nathan got back to her at the last second. He said he was all in! Nathan may suggest that Lulu’s not to blame. When Peter walks in, he’ll contend that someone’s statement is exactly right.

Peter might admit that he didn’t try hard enough. He obviously wanted this interview out there, so maybe he didn’t put much effort into killing it. Across town, Ava (Maura West) will want the scoop from Julian (William deVry). She’ll ask about Alexis (Nancy Lee Grahn), who seems a bit jealous of Julian and Kim’s (Tamara Braun) new connection.

Speaking of Kim, she’ll get an earful from Carly (Laura Wright) at GH. Carly found a box of condoms in Josslyn’s (Eden McCoy) bag, so she’ll be ready to unleash her wrath. She’ll tell Kim that her son should take a cold shower. Carly will argue that Oscar’s (Garren Stitt) the instigator in all this.

Kim will fire back that she never had any problems with her kid before he met Josslyn. She’ll think Joss is the one who’s all hot and bothered. Elsewhere, Josslyn will ask Oscar if they’re really going to do this. Oscar will leave it up to Josslyn and insist that he wants her to be absolutely sure. Perhaps they have plans for some lovemaking after the ball.

Thanks to Joss and Oscar’s angry moms, they may not get to attend the event at all. Carly would ground Josslyn to the end of the century if she had her way. Meanwhile, Finn (Michael Easton) will meet up with Anna (Finola Hughes). He’ll point out that he didn’t get a chance to say goodbye before he left.

Anna and Finn are on the verge of something great, but their doubts are holding them back. Will they ever be able to take the plunge? We’ll give you updates as other General Hospital news comes in. Stick with ABC’s GH and don’t forget to check CDL often for the latest General Hospital spoilers, updates and news.