BY hellodrdavis on November 26, 2019 | Comments: one comment
Related : Hallmark Channel 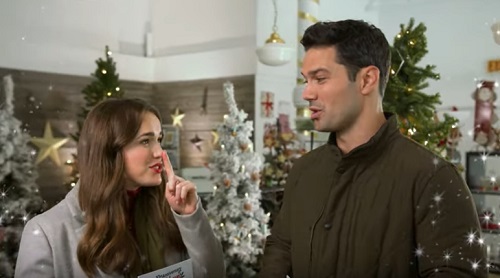 Hallmark Channel news has some great information to pass on about a new holiday movie that premieres this Thursday, November 28th. Fans of General Hospital won’t want to miss this one, as it stars GH alum Ryan Paevey, who portrayed Nathan West on the CBS soap. His new movie looks fantastic, and we’ve got all the details right here.

So, what’s the movie about? Well, it takes place at The Plaza, which is a landmark hotel in New York City. “I play Nick Parelli,” says Ryan in the behind-the-scenes feature for the movie. “And my family business is the decorating business, so I get to decorate The Plaza for Christmas, which is great.”

Ryan continues: “And at the same time, this lovely lady has been hired to help The Plaza with a presentation of the history of Christmas at the Plaza for its guests, so we come together. So you get to see someone who’s really excited about the season show someone what’s special about it.”

Ryan’s love interest in the movie is Elizabeth Henstridge, who you might remember from Marvel’s Agents Of S.H.I.E.L.D. She’s been a regular on the series and recently directed an episode. About her character on “Christmas At The Plaza” she says: “My character, she’s got 3 PhDs, she’s very intelligent, very academic.”

Elizabeth continues: “She thought this would just be a job to tide her over in between but it turns into something else.” As she’s decorating the landmark hotel, she finds herself falling for Nick, and she must figure out her romantic priorities and decide if she’s ready for a relationship with him.

“Christmas At The Plaza” is one of The Hallmark Channel’s many movies in its Countdown To Christmas series, which is celebrating its 10th Anniversary this year. “It feels great to be a part of the Countdown to Christmas legacy,” Ryan states. “I feel really lucky to be included.”