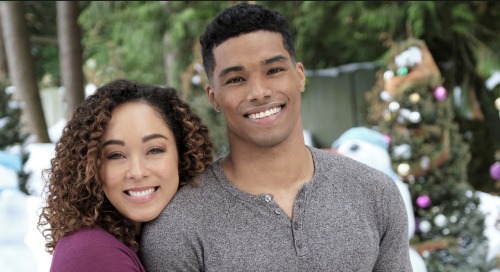 “A Christmas Duet” premieres on Monday, November 25th at 8pm Eastern. You might recognize Rome Flynn from his role as Zende Forrester Dominguez on The Bold and the Beautiful. He appeared on the CBS daytime drama from 2015-2017. He’s also appeared as a series regular on How To Get Away With Murder and The Haves And The Have Nots.

Regarding his co-star Chaley Rose, she’s both an actress and an accomplished singer-songwriter. She’s performed in various venues around the world, including the Grand Ole Opry, the Ryman Auditorium, and The Troubador. She’s appeared in various television series, including Nashville and Code Black.

So, what’s “A Christmas Duet” all about? It’s a story about a a musical duo who went their separate ways years ago, but suddenly find themselves reunited. Averie (played by Chaley Rose) has given up music and opened up a lodge in a Vermont town, while Jesse (played by Rome Flynn) still tours but has struggled to find the kind of success he enjoyed while paired with Averie.

Fate ends up bringing the pair together over the holidays at Averie’s lodge just in time for the annual Yuletide Festival, but can the magic of Christmas help reunite them? It sounds like a great story, and there will be plenty of music and romance. Viewers will be treated to the duo’s hit song Wouldn’t be Christmas, which Chaley and Rome recorded for the show.

About the movie, Chaley said: “I think this is really exciting. This is the ten-year anniversary of Countdown To Christmas, and I think we made the best Christmas movie ever.” It will certainly be a great way to kick off the special Hallmark event.

We’re looking forward to seeing the movie and enjoying the music as well. Will you be watching “A Christmas Duet?” Enjoy all your Hallmark Channel holiday movies and don’t forget to check CDL often for the latest Hallmark Channel News.