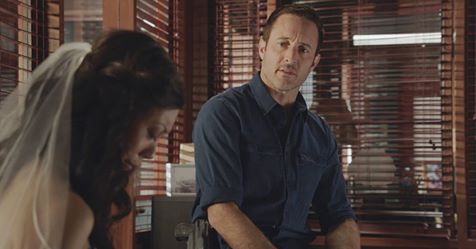 Tonight on CBS Hawaii Five-0 air with an all-new Friday, April 26, 2019, episode and we have your Hawaii Five-0 recap below. On tonight’s Hawaii Five-0 season 9 episode 22 called, ‘O ke kumu, o ka mana, ho’opuka ‘ia” as per the CBS synopsis, “Adam examines the murder of an FBI agent who is about to marry a Yauka leader’s daughter. Noelani is held, hostage”

A runaway bride came to Five-0’s headquarters. The bride’s name was Tamiko and she was a friend of Adam’s which is why she came by. She wanted to see him and get his advice, but she was wearing her wedding dress and so he had a pretty good idea of what the advice might be. Adam thought she was suffering from some cold feet and Tamiko said she wished it was just cold feet. Tamiko came to him with a genuine problem. She met her through her father who was Hajime Masuda and the current leader of the yakuza. Her father had liked Kevin and he introduces him to his daughter. Tamiko said Kevin was unlike any man she’s ever met and they were happy together. It wasn’t until later when Kevin decided to be honest with her and admitted that he was working with the feds. He was plant sent in to spy on her father.

It hadn’t mattered to Tamiko because she truly did love him. He also loved her and so they kept the secret between them, but on the night before their wedding, he received a call from out of the blue. Her father called wanting to see him and he left to go talk to him. Tamiko thought her father was giving last minute advice on being a good son-in-law and she had talked to him afterward because he wanted to assure her that he was alright. Kevin said that her dad just wanted to talk and so Tamiko didn’t think there was a problem. She got dressed for her wedding and she went to the ceremony where she waited and waited for a groom that never arrived. He wasn’t at his apartment either because Tamiko checked and so she needed her good friend Adam to investigate what happened to her fiancée because she was scared that her father killed the man she loved.

The team later looked into this and Tamiko had been right when she said her fiancée was FBI. He was Special Agent Kevin Okada and he hadn’t used his cell phone or credit since he last talked to Tamiko. The team believed her when she told them about her suspicions and so they sent in Adam to talk to Masuda. Masuda was an old family friend of Adam’s parents and he respected Adam enough not to beat around the bush. He said that “yes” he did know that Kevin was FBI, but he didn’t want to hurt his daughter and so he asked Kevin to see him that night because he had a plan. He said that he had five million dollars in an offshore account and that Kevin was supposed to take the money after the wedding to start a new life with Tamiko. She didn’t know what her father was planning only he did what he because he loves her.

Masuda said that they couldn’t have a life together once the truth came out and they were still on the island. So he created his plan and it was supposed his daughter’s happiness. She wouldn’t drag down by yakuza politics and she could have the family she always wanted. Only if Masuda hadn’t killed Kevin then what happened to him? The team questioned if Kevin took the money and decided to run off with Tamiko, but that didn’t sound like him and they soon found his body in his car. He had been murdered in what seemed like a hit and it was up to Adam to break the news to Tamiko. She had broken down in tears when she heard what happened and she admitted that after what happened with her first marriage that she had promised herself that she was never going to get involved with someone in the organization because this what happens.

Tamiko has had her father’s business overshadow everything in her life. She just wanted to find love and be happy, but now with Kevin dead, she thought her father was partly responsible and Adam told her that he didn’t think so. He and his team believe that one of the men that Kevin put away was behind the hit. They checked out their theory and they found Ron Craft. Craft had gone to prison based on the evidence Kevin collected and unfortunately he got out. He was released because of an error and when he got out he went back home to his wife. The same wife that surprisingly making ends meet without a job and so Craft asked her about it. She told him that his old friend Aaron (who was really Kevin) has been helping her. She gets wired money from the post office and she hadn’t told Ron when he was in prison because Aaron asked her not to.

The FBI agent with the heart of gold had come up with this lie about how they shouldn’t offend Ron or risking upsetting him because of his pride. So the wife didn’t say anything. She thought her friend was just looking out for her and in truth, she was just another person he got too close to on a case. Kevin couldn’t distance himself from the people he was investigating and its no surprise that he fell for Tamiko. Tamiko was so heartbroken now that her father may have tried to make things up to her. The team later found Ron Craft and he too was dead. He was killed professionally and everyone thought Masuda was behind it. They also questioned how Masuda figured out he was the guy and the only conclusion they could draw was that Masuda has someone inside of the bureau. And so the team thought that the bureau had to clean their own house, but it seems they didn’t notice something until it was almost too late.

The team couldn’t bring the body back to the morgue because Noelani had disappeared. They checked the security cameras and Noelani had been kidnapped. She was taken hostage because she was needed to grab medical supplies and she only went with them because they claimed to have kidnapped her mentor Dr. Chu, but her friend had been working with the bad guys and so Noelani wasn’t sure of her position. She forced Chu to choose between her and her career as a mob doctor. Her mentor chose her and got a bullet for it. But Noelani was able to finish the surgery by herself and by the time she was done the team had figured out she was. They came and they rescued her. And it didn’t matter to Noelani because her friend and mentor died as well.

The woman, that had been there for Noelani when her mother died, died from her injuries.

As for Masuda, he didn’t admit to anything and he didn’t believe the badge was going to be Adam’s long-term goal.