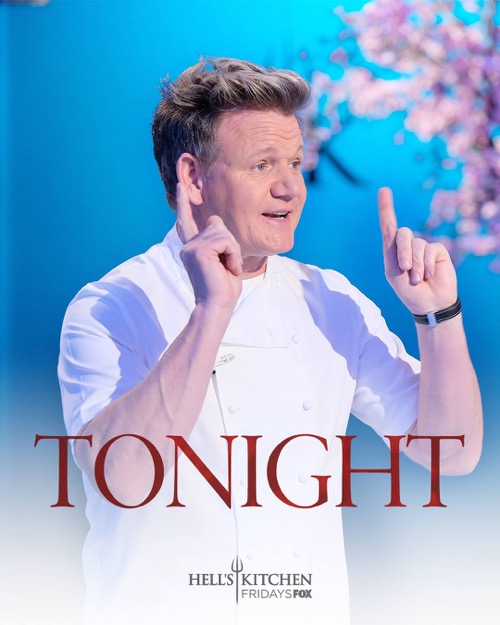 The dinner service starts without a hitch, but one team’s lack of communication causes pure chaos in the kitchen, resulting in a dramatic elimination.”

Hell’s Kitchen begins tonight with the remaining chefs furious about Trev still being there and Bret confronts him, with Motto agreeing that Trev isn’t about the team at all. Bret keeps some of them are golden.

In the morning, Trev takes a call from Chef Gordon Ramsay who wants them all downstairs immediately. In the dining room, Karolina Calhoun (2013 US Figure Skating Champion) and Collin Brubaker (2010 Silver Medalist US Figure Skating Champion) are ice dancing in frozen Hell’s Kitchen. Ramsay tells them similar to ice dancing, in the culinary world there is nothing more romantic than desserts. Today’s challenge each of them has to make one spectacular delicious dessert and are given 60 minutes to complete.

Since the blue team has an extra chef, they have to come to a consensus on which to drop; all agreeing that Heather’s will be removed and she is not impressed. Chef Ramsay is shocked because he thought the bread pudding sounded delicious; Heather hopes this bites the other ladies in the ass.

Guest judge is Valerie Gordon, a celebrated Chocolatier. They begin with Kanae who made a deconstructed tiramisu; both judges feel the presentation is unfinished. (3). Motto brings up his campfire bread pudding, which they feel is a great concept; but believe he should have used bittersweet chocolate. (7). Mia brings up a deconstructed roasted apple and mascarpone tart. Valerie describes it as “muddy” (4). Bret produces an Italian white pudding, made into little balls. Valerie says it is really al dente; both underwhelmed as they are not cooked at all. She liked the concept but the experience was not great (2). Ariel brings up her Thai lime and beet tart, which Valerie says it tastes really yummy and it is very smart (7). Trev brings up avocado kisses, but Valerie tells him she really dislikes the dish, incredibly soggy and tastes like a bush (2).

The blue team wins 14 – 11 and after Valerie Gordon is dismissed; they learn that they are getting two thousand dollars to go on a shopping spree. The men are told they need to chop and chip ice, as it is ice delivery day in Hell’s Kitchen with 600 lbs of ice coming. Motto is frustrated as he hoped trev and Bret would have performed better than that. Marino shows them how they are to make 2X2 ice cubes and under Marino’s watch, they keep making huge mistakes, chipping away at the ice.

The women arrive at Joey Woodland Hills, where they hang out with Jocky outside of the kitchen. They are all happy to get to know him as a person, as he terrifies them in Hell’s Kitchen. Heather is still pissed off about being disregarded; she is determined to get through dinner service as a team and then it will be every man/woman for themselves.

Trev is finally able to produce one ice cube, but he makes fun of Valerie’s opinion which pisses Bret off as she is world renowned. Trev starts smashing the ice, not giving a crap anymore; both Motto and Bret feel Trev is cracking more than the ice. Meanwhile, the women are thrilled to walk into Sur la Table, acting like kids in a candy store. Heather sees a little kids’ apron and all she can think about is her son, Logan; continuing to buy things for her and her son.

They return to the kitchen to prepare for tonight’s dinner service. Trev tells sous chef Christina that he will do whatever it takes, including starting in the dish pit. Christina questions him about Bret and Motto not listening to him and they need to mesh as a team, but both feel that Trev is talking crap about them also observing that his pancetta is burning. Trev walks back into the kitchen telling them to get working as they are behind. Chef Ramsay asks Marino to open Hell’s Kitchen!

The first orders begin to come in as Chef Ramsay reminds them to taste everything, but since Mia has a shellfish allergy she is unable to taste her risotto. Heather and Ariel both feel that she shouldn’t be cooking it if she can’t taste it so Ramsay suggests Ariel does the risotto and Mia does the carbonara. Thanks to Ariel’s guidance the blue team is working well and quickly both teams are ready to begin entrees.

The red kitchen is flat, as Trev shouts out times and no one is responding to him. Christina orders them to get it together and Chef Ramsay isn’t impressed with their lack of communication, already getting raw Beef Wellington. He yells that they all need to get their head out of the sand and get a grip.

It is 45 minutes into dinner service and Trevor’s undercooked wellington has stalled the red kitchen. Trev feels that Ramsay is pushing him to the point where he either loses it or rises to the occasion. Chef orders him to step up. He tells the blue team he needs the momentum now; Heather is amped and pumped but the steaks are overcooked. He demands to know what is going on, with Heather saying she basted it too long but furious as she never screws up on proteins.

The red team is bringing food up to the pass when Motto asks Trev where the crust is for his lamb as Bret rides him. Christina tells Chef Ramsay what Trev did and he brings the food back, showing how nasty the fish looks because they are using a dirty pan. He demands to know how Trev forgets the crust on the lamb, saying he never did one before. Chef says right now they are three individual chefs and no sign of teamwork.

Ariel is shocked that Heather is struggling with the meat station, feeling in the real world she would get fired for this. Chef Ramsay tells Heather the steaks are fine, she only needed to let them rest and is able to steer the meat station back on track. Trevor brings up the lamb, and it is overcooked so Chef Ramsay calls the men AND Christina to the back room, yelling for them to close the friggin door. He throws the lamb, saying it is the biggest insult and tells them to f**k off. He calls them all pathetic and wants to know if they have given up; Christina tells them to pull their crap together.

The chef table orders come in as Kanae has to tell the chef table why it is taking so long for the salmon as the rest of the table receives their food. Kanae gives Ramsay the salmon at the pass and he tells her it is raw. He orders her to leave him alone and begins to make it himself. She is extremely embarrassed but doesn’t want to see salmon in her face again.

Chef Ramsay tells the red kitchen if they have any inspiration or excitement. He knows their guest is pregnant and tells them the salmon is ice cold and beef wellington is raw. He kicks the door, shouts that they have an MVP player and his wife is 5 months pregnant. He tells them he is done and for them to get out; and they need to choose on one person who has to leave. Trev knows his two teammates want him to go home. Motto did everything he could and if it is between Bret and Trevor it is definitely Trev. Bret prays as Motto is the one who needs to break the tie.

Back in the dining room the red team returns as Chef Ramsay says there are things he saw tonight he couldn’t believe; especially a pregnant lady being served raw fish. Trev insists that Motto and Bret were the ones who kept shutting down, with no communication and it was the fish station that screwed them.

Ramsay tells the ladies that this is the service he witnessed over the last two hours as the red team is fragmented beyond belief. Bret believes Trevor is the weakest chef as Trev says all he sees out of Bret is Italian. Chef Ramsay tells Trev and Bret to step forward. Bret says he cooks his heart out as food is all he has. He knows it was subpar tonight and there is no excuse. Trev says nothing has happened to him, but the entire team has given up on him. This isn’t a lifestyle for him, it is his life and he will do anything for his job.

The person leaving Hell’s Kitchen is Trevor. He has been up there three times and his dinner services and breakdown indicate to Chef Gordon Ramsay that he is not ready to be his head chef in Las Vegas. Bret is given a lifeline but Ramsay wants to see a lot more from him. He needs a volunteer from the blue team to join the red team, he wants to know who is truly a leader. When they walk back to the dorms, Bret promises he isn’t a one trick pony and there is no more “Mr. Nice Guy!”

“Trevor is one of the most passionate chefs I ever had in Hell’s Kitchen, but until he has the support of his brigade, he will continue to be lost at sea!”
~Chef Gordon Ramsay