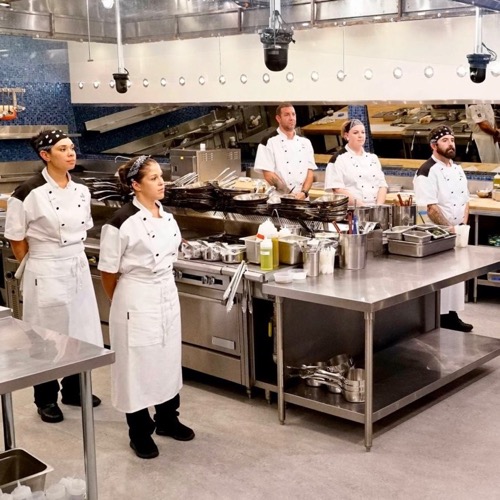 Tonight on FOX their Gordon Ramsay culinary competition series Hell’s Kitchen airs with an all-new Friday, January 18, 2019, season 18 episode 13 and we have your Hell’s Kitchen recap below. On tonight’s Hell’s Kitchen season 18 episode 13 episode called, “An Episode of Firsts,” as per the FOX synopsis, “All hell breaks loose as the final five chefs struggle through a new challenge, leading to a bitter elimination that dramatically alters the dynamic of the group. As the remaining chefs reach the final stages of the competition, the pressure is at an all-time high.”

Hell’s Kitchen continues tonight with the 5 black jackets celebrating, except for Heather who feels left out and says she is gunning for everyone. Bret talks about being the product of his environment, looking at 30 years in prison when he was only 20 years old; it was the only food that saved him.

In the morning, the chefs get ready as Sous Chef Jocky brings in breakfast from Chef Gordon Ramsay. Sous Chef Christina welcomes them to black jackets as they enjoy their beautifully executed food. Ariel has mentally logged the dishes and presentation. When they are done eating, everyone is called down to the Blue Kitchen by Ramsay immediately. Chef Ramsay questions them about their breakfast because this is the challenge that separates the chefs from the cooks – the taste it now makes it challenging.

The chef who is the most successful with the Eggs Benedict wins the challenge. Everyone picks Canadian Bacon while Motto goes with Proscuitto. For the Hollandaise sauce, Mia uses shallots and Espelette powder. Motto uses shallots and red wine vinegar. Ariel and Heather are only using paprika. Bret uses chives. Their time is up as Chef hopes their palettes served them well. Motto (finds it interesting), Heather (he says this is not even her dish), Bret (there is no sauce, eggs are not done right and bread is burnt), Ariel (he thanks and says it was interesting), Mia (he says wow).

Bret and Heather are told they cannot serve a broken Hollandaise at all for breakfast and both are out. The motto is incorrect about using only Proscuitto; so they are down to Ariel and Mia are right with the proteins and winners of the challenge. There were shallots and paprika in the sauce, which he considers brilliant. He learns Ariel is afraid of heights, asking if they have been skydiving because they are going indoor skydiving for their reward. Christina is smiling, who would love to go and Ramsay allows her and Jocky to go with them.

Bret, Heather, and Motto are going to be miserable because it is dorm cleaning day. They need to sweep, mop, dusting, vacuuming and polishing the dorms. He wants it spotless as the cleaning supplies will be arriving shortly. Both Heather and Bret feel they are letting themselves down, Heather thinks she needs to put her head down and cook her heart out, making it extra hard for any of them to go home.

Mia is like a fearless firecracker and tiny in the tube. She is so excited, but Ariel asks the instructor to go easy on her, hoping she won’t freak out. She makes it, thinking she might be able to work herself up to jumping out of an airplane. Jocky looks like he has little pigtails through the helmet and Mia doesn’t know how she is going to take him seriously in the kitchen now. Back in the dorms, Heather feels like she is back at home cleaning up after her 5 yr old son. She thinks people are gross. Bret feels they are like Cinderella. Heather talks about some of the food that was rotten in the back of the fridge; they both know it is Mia’s food. Heather talks about how Mia works flawlessly independently but cannot work in a team.

Mia, Ariel, Christina, and Jocky go to Sweet Butter for lunch. Christina talks about Season 10 when she won her black jacket. She reminds them that now they are down to 1 kitchen and need to work together. Ariel has been there before as Mia knows Ariel is her biggest competition and feels beating her would be unbelievable. Ariel believes the mentorship of the program is over and its time for them to shine individually.

The chefs prepare the kitchen for dinner service as Mia cannot stop talking to everyone, feeling like she is better than everyone else. Heather mutters to Motto that she is going to kill her. Ariel refuses to get caught up in the “too many chiefs in the kitchen” issue. Chef Ramsay reminds them to tell him as soon as there is an issue so they can correct it quickly.

Marino opens Hell’s Kitchen to their guests including Kelli Berglund (actor, Lab Rats), Tyler Higbee (Tight end, LA Rams), Jared Goff (QB, LA Rams), and Drew Van Acker (actor, Pretty Little Liars). The first orders come into the black kitchen, Mia complains that Heather is already in need of help. Ariel needs more time on the risotto, but as she continues to call out to Heather, she finally shouts back at Ariel. Chef Ramsay comes back as the scallops come up and they are still waiting on risotto and octopus; Heather apologizes and Chef Ramsay reminds that he wants her to run the fish kitchen. They are stuck starting all over again. Mia keeps chirping in the background, feeling Heather has no idea what she is doing. Heather is told the scallops are nicely cooked and everything is running smoothly.

The kitchen is ready to move onto entrees with Bret and Motto on the meat station. No one is listening to Heather, who says she needs 2 minutes. She is made to look like an imbecile, being rushed when the protein isn’t ready. Heather’s fish is cooked perfectly, but Bret’s meat is raw. Motto needs Bret to be more vocal and Chef Ramsay tells him that they need to start talking and Bret better do it; reminding him if they stop communicating they are screwed.

Motto brings up the strips, which are nice, but once again they are not talking when there is no sauce with the steaks. Chef Ramsay orders Bret to talk again, so he swears he will scream at the top of his lungs so Ramsay hears him. Bret yells at Mia for garnish, but she has no idea what garnish she needs; looking like a deer in the headlights. The lamb and steaks are ready but Heather messes up again, she needs to refire the salmon as the skin came off. Marino is called into the kitchen where Heather is forced to apologize to him; Mia claps over it.

Motto, Mia, and Bret take over the cook on the salmon and Motto save it as Chef Ramsay tells him it is nicely cooked. The LA Rams enjoy it, but feel bad that the chefs got yelled at for it. Everyone is misreading the tickets and they are getting different information. Chef Ramsay drops his cutlery as Motto talks about how much halibut they are making when Bret says something; Ramsay tells him to STFU!

It is 7:05 pm and Motto has taken over the fish station from Heather, while the rest of the team can’t get their numbers right. Chef Ramsay tells them all to stick to one 4-top at a time and Motto just wants everyone to shut up so he can cook the fish. Ramsay tells Christina that Motto can definitely cook. The black kitchen pushes to complete dinner service as customers thoroughly enjoy the food.

Chef Ramsay tells them they got off to a great start but couldn’t maintain it. He wants them all to go back to the dorm and decide which two people should be put up for elimination. Heather feels attacked, saying her team failed her when people keep picking her to go up. Bret says this isn’t personal it is business as Ariel walks inside the dorm. Mia feels Bret should be put up because he had 2 steaks brought back, but Bret feels she was a deer in the headlights and doesn’t need to cover for anybody. He scoffs, asking if she is trying to intimidate him by raising her voice?

With everyone back in the dining room, Ariel says the first nominee is Heather as the fish kitchen struggled with cookery and communication. The second nominee is Mia on the garnish station. They both step forward as Heather feels she hasn’t given up doesn’t shut down and knows she is better than this. Mia cuts her off, as Heather says she shouldn’t have to scream across the brigade for them to hear her. They continue to bicker until Chef Ramsay wants to know why Mia should stay. She feels she was always doing callbacks and always had her garnish ready. He asks Motto based on everything he saw tonight and the course of the competition he thinks Heather struggled the most and the weaker performer. Bret feels it is Mia. Ariel says Heather should go home.

Chef Ramsay chooses Heather, saying she isn’t ready to be his executive chef. He shakes her hand and asks her to say hello to her son. He reminds them they are the final four and need to push every second they are in the kitchen. Mia thinks they can kiss her ass as she is there to win. Bret has been waiting years for this moment, 25% shot of winning. Ariel feels this is it.

“Too many times Heather blamed her mistakes on having a bad day. I’m not looking for apologies. I’m looking for an executive chef!”
~Chef Gordon Ramsay