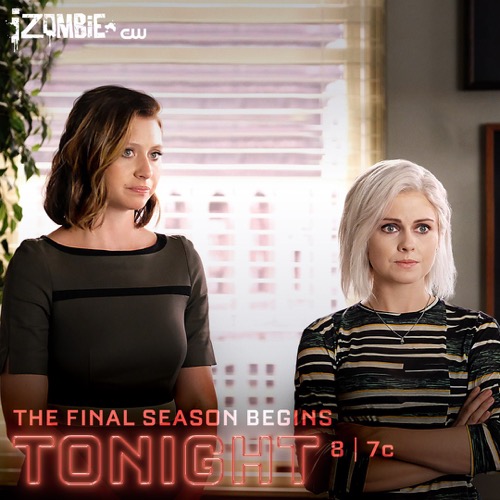 Tonight on the CW iZombie airs with an all-new Tuesday, May 2, season 5 episode 1 premiere called “Thug Death” and we have your weekly iZombie recap below. On tonight’s season 5 episode 1 as per the CW, “The Season 5 premiere: Liv and Clive investigate a murder case with no body and no brain to eat, and the only evidence they have to work with is a grainy video and a little bit of blood found at the crime scene. Meanwhile, Blaine is up to his old tricks.”

A store clerk talks to customers about how zombies don’t come into his store.  In the backdrop of the video camera of the outside a zombie attacks two women. They know better, he tells the young girl. He spoke too soon as she ends up being a zombie, rushing off with a lot of self-tanner.

Liv cooks up the brains of a bad man, Thumb Breaker Barnes. She turns her back and when she returns Ravi is eating them. Meanwhile, Blaine invites his two recent one night stands back after for some fun. He heads to work where Donnie tells him about a video of a zombie who was caught chowing down on some ladies. Major arrives. He is annoyed with the video. Blaine is supposed to be smuggling brains across the border. Major wants Blaine to clean this mess up.

Liv, Ravi, and the others are at the police station to view the notorious video making the rounds. Peyton arrives. Ravi wants to know what she did to her hair, it’s short. Liv tells her he ate the brains of Thumb Breaker Barnes. Before they depart to figure out what is going on Clive’s lady asks him to get chocolate.

Liv, Clive, and Ravi head to the local store where the video was caught on surveillance. They catch a glimpse of their victims.

Major is brought a deck of cards with his photo on them. He and his soldiers look at them.

Liv shows Peyton a video of a teen boy who is trying to escape a terrifying foster home where he is being abused. Liv wants to save him. Peyton thinks she should do it. Liv heads to meet baron.

Peyton appears on Frost Bites to talk about the current zombie/human issues.

Baron meets with the kid Liv is interested in saving. They talk on a park bench. Baron is surprised when the teen boy brings two teen girls with him. He wants to save them too. Baron doesn’t know how he is going to pull this off.

Ravi still isn’t himself. He is worked up about Peyton on TV. The host was eyeing her! He gets a call from a scientist who thinks she might have a cure. Ravi is so rude that she doesn’t want to talk to him. He finally gets back to himself in time to tell her the cure she has in mind would cost innocent kids their lives. She doesn’t care or believe him and hangs up.

Two men meet at a food stand. The woman who was on the Frost Bite the other night with Peyton meets the man. She asks him for a video. He tells her about how “they” have his kids. In turn, she gives him a time and place. He looks back at the inside of his van where he has explosives.

Clive and Liv meet with a man they hope can help them identify the victims from the video. Meanwhile, the man in the van sits outside a checkpoint. Major and his soldiers show up but it is too late. The man has driven through the checkpoint and caused an explosion.

Clive and Liv get word of the explosion. Across the city, Blaine’s men have brought him those that were helping him get brains past the checkpoint. He wants to know why they stopped honoring their deal. The group explains that they have changed their minds after witnessing a zombie eat someone brains. Blaine isn’t happy they no longer want to help him.

Major gets word that 5 border agents were killed in the explosion. Meanwhile, the teen boy is on a bus. An officer asks him where he is headed.

Clive and Liv are in the woods looking for the victim. They come across a man who knew her. He is crying over her body.