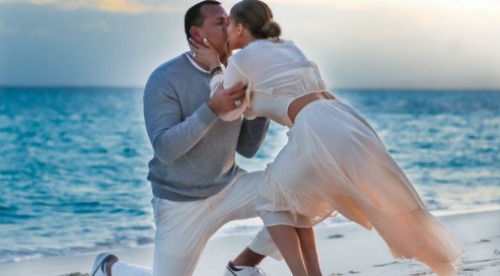 Jennifer Lopez was apparently left shocked when her boyfriend of two years, Alex Rodriguez, proposed to her during their getaway to The Bahamas earlier this week. The chart topper, who has had many high-profiled relationships in the past, had no idea that Alex was planning something very special for her during their trip.

According to Us Weekly, even though she and Alex are in a comfortable place in their relationship, she never expected that he would propose. As a matter of fact, she didn’t think it would happen so soon.

One insider told the publication, “They’ve talked about marriage and have always planned to spend the rest of their lives together, but they were so happy with exactly how things were, they weren’t sure if they wanted to go down that road. It’s almost like they didn’t want to jinx it.”

And while Jennifer Lopez supposedly didn’t see the engagement coming, she might have noticed some signs as this will be her fourth walk down the aisle. The singer and actress first tied the knot back with Ojani Noa back in 1997. Her second marriage was to her backup singer Criss Judd.

Her third and most successful marriage to date was to Marc Anthony. The couple married in 2004 and divorced in 2014. They share two children together, their 10-year-old twins, Max and Emme. Alex, meanwhile, has two children, Ella, 10, and Natasha, 14, with his ex Cynthis Scurtis.

The engagement news came right before Jose Canseco made allegations on Twitter that Alex has been less than faithful to his future wife with his ex, Jessica Denies. Jessica has gone on the record to deny the claims, stating that she and Alex are just friends.

So far Jennifer has not made any comments about her engagement, nor has she and Alex said anything about their wedding plans. But seeing how they shared many behind-the-scenes photos of Alex’s proposal on social media, there’s a strong possibility that their wedding will also be a huge media affair as well.

In the meantime, don’t forget to check back with CDL for all the latest news and updates from Jennifer Lopez, Alex Rodriguez and all of your favorite celebrities right here.