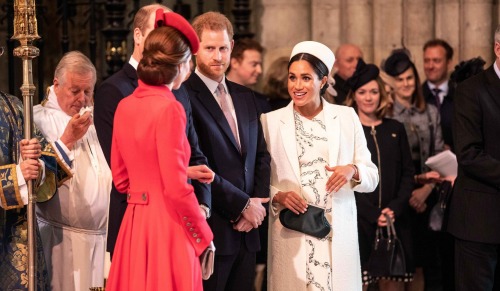 Kate Middleton and Meghan Markle have supposedly been feuding for months now behind the scenes, or at least according to some media reports. Despite whatever animosity might be between them, the future Queen of England managed to show her sister-in-law an unusual show of affection at Westminster Abbey for the Commonwealth Day services.

This move has left a lot of royal observers and critics alike stunned by the moment, prompting many to wonder what is really going on behind palace doors.

According to Fox News, Kate Middleton gave her pregnant sister-in-law Meghan Markle a kiss in public, which is something that she’s never done before. Yet, royal expert Katie Nicholl believes it’s no accident. As a matter of fact, she thinks that it was a well-planned move on Kate’s part.

Nicholl, who wrote the book Harry and Meghan: Life, Loss and Love told Vanity Fair magazine that the Duchess of Cambridge knows exactly what’s going on and what the press writes about when it comes to royal gossip and speculation. That’s why she took matters into her own hands to put a stop to it, once and for all.

“According to a palace source, Kate Middleton’s unusual public gesture was deliberate — she hoped the warm embrace would be captured by the world’s media and finally put an end to the rumors of an ongoing feud,” Nicholl said in her interview with the publication.

A second insider says that while the media has been posting reports about an ongoing feud between the two duchesses, they couldn’t be any further from the real truth. Even though they have very few things in common, Kate Middleton doesn’t have any real issues with Meghan Markle. As a matter of fact, the two women are still getting to know one another as Meghan hasn’t even been a member of the royal family for a full year yet.

Buckingham Palace has not made any comments about the feud reports. In the meantime, don’t forget to check back with CDL for all the latest news and updates on Kate Middleton, Meghan Markle, and the entire royal family right here.