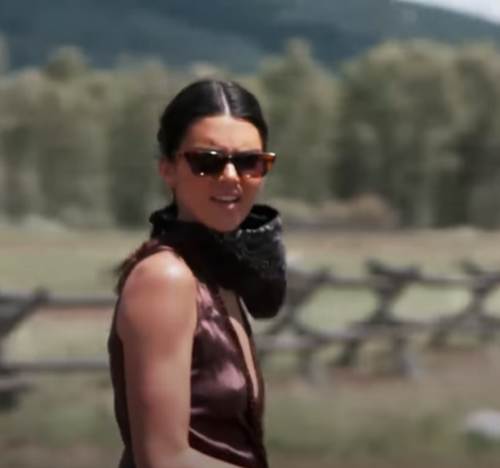 Tonight E!’s most-watched series Keeping Up With The Kardashians (KUWTK) returns with an all-new Sunday, December 15, 2019, season 17 episode 12 and we have your KUWTK recap below.  On tonight’s KUWTK season 17 episode 12 season finale called, “Cattle Drive Me Crazy,” as per the E! synopsis, “Kris takes the family to Wyoming in an effort to ease recent tension and strengthen their bond, but her plan backfires when the girls start fighting on the trip. Kendall is excited to spend some much-needed bonding time with Kylie.”

Kris was frustrated with her family. They were all arguing about Kourtney’s boundaries and where those boundaries should be in terms of their reality show, but Kris had had enough. She wanted to get away from all the fighting. She even thought a family trip to Wyoming might help them come together and so she told them about it tonight. She told them how she had everything. They would go away and decompress and they didn’t have to worry about a thing. Kris wanted them to relax. She suggested that they leave the kids behind and Kourtney sort of chose to ignore her.

Kourtney did bring her kids. She said her kids had never been to Wyoming before and that the trip would be a brand new experience for them. But no one else brought their kids. They all came alone like planned because they knew this trip was about their bonding and they couldn’t do that if they were focusing on their children. Kim and Khloe tried not to make a comment about it but they were annoyed about taking two planes to fly a few hours. There was also the fact Kylie wasn’t coming and neither was Scott.

They both stayed home. Therefore, Scott could have had the kids and there really wasn’t a reason why they were on the trip. Kendall was coming. Kendall was also the most annoyed with Kylie not coming because Wyoming has always been a special place for them with their dad and she came a long way just to make this trip while her sister skipped out on doing the minimum. The trip hadn’t officially begun and yet the sisters were already annoyed with each other. There was infighting before this trip and there was going to be plenty of it during the trip.

Kris tried to bring them together. She told them that they all needed to work on something and how they should use the trip to appreciate each other. Kris did everything she could to heal the rifts. She arranged activities and the first one was a throwback to Kourtney’s first job on reality tv. Kourtney, it seems had done a little show called “Cattle Drive”. It was way back when and it was canceled, but Kourtney did it and so Kris thought Kourtney would know what to do as they went on a cattle drive. And it turns out she wasn’t the expert her mother thought she was.

There was this one horse that nearly killed her. Kourtney refused to go near that horse again and it also seemed like she refuses to get on another horse while she was being filmed. She waited until she could privately get on a horse again for her to get back on, but the rest of the trip didn’t leave up to the hype. There was no bonding and the sisters didn’t really care for the cattle drive. No worries, though, Kris had more activities up her sleeve. There was the rope climbing and Kim freaked out because she’s still very much afraid of heights.

Kim came back down. Her family ended up going without her and at least one of them enjoyed the obstacle course. Kourtney had fun. She also made fun of people who didn’t finish the course and so Khloe snapped back at her. The two got into an argument over it and there had been nothing Kris could do. Kris was up on the obstacle course when everything went down. Kourtney called Khloe a couple of names and Khloe called her a bully. And that just riled up Kourtney because she claims she’s been bullied by Khloe and Kim for the last two years.

Kourtney then said she felt defeated after Khloe blew up at her. She was so upset by the encounter that she wanted to leave Wyoming early and Kendall tried to talk her out of it. Kendall reminded Kourtney that they are sisters and that sometimes that meant pushing each other’s buttons. Kendall knew what she was talking about because she’s felt like the odd one out. She didn’t have kids and she was constantly traveling for work. She didn’t have the usual bonding time that everyone else had and if she was telling Kourtney to stay – then Kourtney should stay.

Kourtney decided to do just that. She didn’t pack up and leave in a huff. She stayed and she argued her point. She told her family she was getting to the point where she wasn’t happy. She said she wanted to focus on her kids and not the show and so she didn’t understand why her family wasn’t getting that. They were all talking about filming. Kourtney didn’t want to film and she might want out. She finally said it tonight. She’s been needing a way to express herself and this trip seems to be it.

But there was one more activity left. Kris came up with this idea where they all dressed up as one family member and just laughed at each other. Even Penelope got involved. She and Kourtney dressed like Kim and Kompany and they all just had fun. They played into the tropes about each other and their sense of humor finally came out.

Everything else was a bust, but the dress up finally got them to lower their walls and they got to hang out like they used to.

They love each other and this trip reminded them of that.