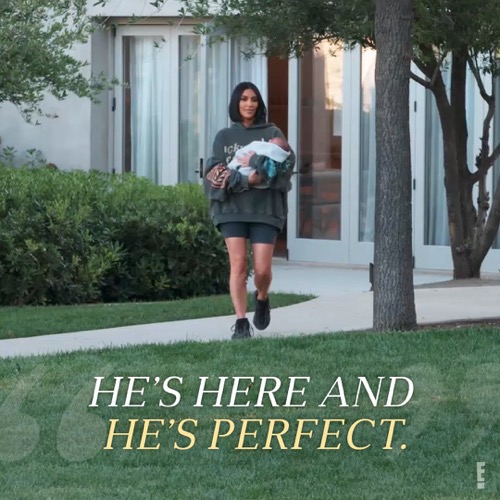 Tonight E!’s most-watched series Keeping Up With The Kardashians (KUWTK) returns with an all-new Sunday, October 20, 2019, season 17 episode 6 and we have your KUWTK recap below.  On tonight’s KUWTK season 17 episode 6 called, “Psalm West,” as per the E! synopsis, “Kim plans a surprise vow renewal ceremony for her husband to celebrate five years of marriage.

When Kourtney’s friends can’t get along on a girl’s trip to Turks and Caicos, she must assert herself to salvage the vacation.”

Tonight on keeping up with the Kardashians, Kim’s surrogate doesn’t need the inversion since the baby is in the right position but they plan on inducing her right away. Kris is a guest in Ellen’s Mother’s Day special and surprises her with Kourtney and all her grandkids. Kylie and Khole have a photoshoot for their collection.

Kim’s healthy fourth child Psalm west is born with no complications, she brings him home to meet the family. Kourtney plans a girls trip to Turks and Caicos, Khole is hesitant due to the horror stories she’s heard.

Kim launched a bridal collection on her five year anniversary and decides to have a vow renewal for her and Kanye for their 5 year anniversary. Kourtney, Khole and their friends arrive for the girls trip, Kourtney is worried about posting content for her website Poosh, she isn’t happy that her friend Larsa Pippen invites make friends on the trip when she just wants to be around her girls, Khole urges her to stand her ground and tell Larsa how she feels about her inviting men on the trip.

Kim may have a hiccup in her vow renewal plans as she learns that Kanye is planning one as well so she doesn’t know if she should still move forward with her plans or just let Kanye throw the renewal vow affair,she decides to take over since she feels Kanye is an amazing dad and does well with the kids when she’s tired.

Larsa Pippen tries to hook her friend Sara up with some males on the trip, their views are different Larsa believes in having one guy for every occasion while Sara is more traditional. Larsa continues to make plans for the girls to go to some male friend’s house but Kourtney is against it.

Larsa and Sara begin to argue over Sara showing compassion over a woman crying in the bathroom, Khole feels both the women may be competing for Kourtney’s attention. Kourtney and Larsa have a talk and Kourtney calls her a bully after asking her to stop being confrontational, Larsa is stubborn and refuses to take Kourtney’s advice, they calm down and Kourtney eventually tells her that her energy is different now and she just wants to hang with the girls, not men because that’s not where her focus is anymore she is more comfortable in her skin.

The girls then go diving off a rustic boat having drinks and laughs, it’s also the last night of the girls trip and they decide to go out on the town to a club to party with the local natives, but the club they go to is empty and they end up partying amongst themselves.

It’s the day of Kim and Kanye’s wedding vows renewal she reminisces with her child Saint about the day Kanye asked her for her hand in marriage.

Everyone is dressed in white, Kim decides to not air the actual vows during tonight’s episode saying it was intimate and private and states it was a beautiful ceremony.