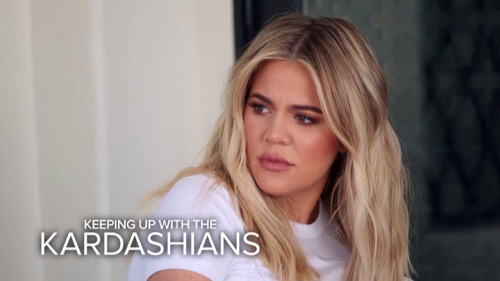 Tonight E!’s most-watched series Keeping Up With The Kardashians (KUWTK) returns with an all-new Sunday, June 23, 2019, season 16 episode 11 and we have your KUWTK recap below. On tonight’s KUWTK season 16 episode 11 is called, “Treachery” as per the E! synopsis, “Khloe deals with some debilitating health issues, but her world is turned upside down when rumors surface that Tristan cheated with family friend Jordyn Woods; Kanye brings his family and friends together to celebrate the healing power of music.”

Khloe was renovating. She was going to expand her home and add on square footage to the overall building. Khloe has been planning this for a while and she was excited. She showed her family and family friend Jordyn Woods how extensive the renovation was going to be, but the drawback was that she will have to move out for a short time. Her family couldn’t stay on at the house because each room was going to be touched upon and so she quickly found a rental. Khloe also planned on going to Cleveland for a bit to be with Tristan and then he was going to come back to LA with her afterward.

It was all arranged and so Khloe didn’t have to worry about it, but she was concerned for a second there about whether or not she was pregnant again. She’s been suffering migraines and nausea. She thought it was nothing and when it didn’t go away she began thinking she could be pregnant. So she did a test. She did a test with her sister and her mother and so it was funny afterward when they all turned out to be not pregnant yet Kris’s one had an additional mark on it that no one could understand. Leave it to her mother to be complicated. The family had a good laugh about that one and unfortunately, they never did get around to what’s wrong for Khloe.

Khloe was still sick and it only got worse. She began vomiting so much that she was bringing up blood and she couldn’t see from out of one eye. Khloe was so sick that she couldn’t go to Cleveland like planned and she instead had to go to her doctor in LA. She went to her OBGYN because she doesn’t know what’s wrong and what to cover all her bases, but her doctor did order an MRI and everything turned out to be normal. Which was a relief? Khloe’s migraines weren’t a sign of something worse going on and so her doctor was doing her best to help Khloe to write off non-concerns.

Khloe’s boyfriend in the meantime came down to LA. He was there for something with his basketball career called All-Star weekend and so Khloe knew she wouldn’t be able to see him all the time, but she never thought that she would get a call about Tristan and Jordyn. Jordyn was Kylie’s best friend and a close family friend. She’s been on vacations with them and has celebrated the holidays with them. Jordyn was important to the family and so why would she not return their calls when they went looking for clarification? Khloe heard rumors about Jordyn and Tristan hooking up at a party and she couldn’t call Tristan because he was on a return flight.

The only person that could tell Khloe what happened was Jordyn. Jordyn first claimed she couldn’t remember and then she said she had to call them back, but eventually he came clean to Khloe. Khloe heard that “yes, they did make-out” and she also heard a lot of nonsense. Like Jordyn told her that she has her full loyalty and how is that impossible after what happened. Jordyn also tried to put it on Tristan and said it as his fault. She went on about how she was so naïve as well and no one knows that means. Jordyn’s statements also didn’t match up with what the blogs were reporting and so Khloe wasn’t sure if she could trust her to even tell the truth.

So Khloe called her sisters. She was on the phone with pretty much all of them and they were going back and forth about what really happened. Khloe didn’t get answers until she heard from Tristan. Tristan confirmed everything that happened. He owned up to the make-out session and that they were together into the early hours. Tristan then tried to apologize, and Khloe wasn’t having it. She called him disgusting and so did her family. They feel like they should all have known what he was capable of since he cheated on Khloe when she was nine months pregnant and so they weren’t really surprised by his behavior. They were just surprised it happened with Jordyn.

Jordyn could have called right after it happened. She didn’t and she didn’t explain herself while she had the chance. Jordyn chose to hide and lie, but when the truth came out, she never once called Khloe to apologize. Khloe waited for it to happen and it just never did. Jordyn chose to call Kylie and even Kris because she wanted to apologize to them and they told her that nothing could be right again between them unless she made it up to Khloe. So she should have called Khloe right then and there. She didn’t and for that Khloe received no closure. She’s been growing more upset with what happened by the minute and she couldn’t really take it out on Tristan.

Tristan was a walking, breathing, and cheating sign of “I warned you”. The man didn’t know how to be true to someone and that point has finally been driven home to Khloe. Khloe tried to forgive him after last time because she thought that was what was best for their daughter and even he ruined that. He gave up his second chance because he didn’t care and so Khloe was forced to accept that. The part she couldn’t forgive was that it happened with a friend. Jordyn was even more than that because she and Kylie grew up together and so that made Jordyn a kid sister to Khloe. Khloe loved her and cared for her. And not once was that care and respect returned.

Khloe couldn’t even turn to church because Kanye’s experimental church wasn’t fully off the ground yet.