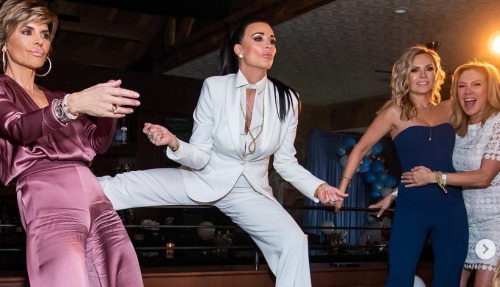 Kyle Richards insists that her good friend Lori Loughlin isn’t the person that the public is making her out to be. The Fuller House star was arrested on Wednesday after being charged in a nationwide college bribery scandal.

Along with fellow Hollywood star Felicity Huffman and about 50 more parents, Loughlin was indicted as part of an alleged college admissions cheating scandal. The actress and her husband, fashion designer Mossimo Giannulli, allegedly paid over $500,000 in bribes to make sure that their two daughters, Olivia Jade and Isabella Rose, would be accepted into the University of Southern California. The Real Housewives of Beverly Hills star Kyle Richards is now defending the couple, saying that they aren’t the scandalous people that the media is portraying them as.

Speaking to Andy Cohen on Watch What Happens Live on Tuesday evening, Richards said she was unaware of anything shady that was going on or Loughlin’s participation in the scandal for that matter. Loughlin and her husband also allegedly faked their daughter’s college admission application by stating that they were crew athletes. Olivia Jade and Isabella Rose, however, had never been on a crew team in their lives.

“We know a lot of people in that circle and it was really shocking,” she said.

Richards also added that her daughter Sophia is good friends with Olivia and Isabella. All three girls have the same circle of friends in Los Angeles. What’s more, Richards insists that she doesn’t know anyone else who was involved in the scheme.

“They are really great people,” she said. “I’m really so confused about all of this. Everyone is talking about it today, in our world and our circle. Until today, I had never heard this ever existed.”

So far, a representative for Lori Loughlin has not made any comments about the scandal. The actress flew from Vancouver to Los Angeles on Wednesday morning to turn herself in to authorities. She was taken into custody at a Los Angeles federal court.

In the meantime, don’t forget to check back with CDL for all the latest news and updates on all of your favorite celebrities right here.