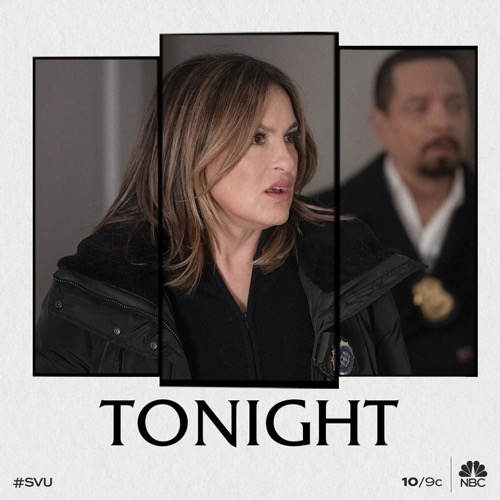 Tonight on NBC Law & Order SVU returns with an all-new Thursday, January 17, 2018, episode and we have your Law & Order SVU recap below. On tonight’s Law & Order SVU season 20 episode 12 called “Dear Ben” as per the NBC synopsis, “Stone takes up the unsolved cold case of a serial rapist that consumed his father’s career.”

A couple was attacked inside of their apartment. This had just gotten home from vacation and didn’t notice anything was off until they entered their apartment. The man that broke in had waited until the couple was separated to tie up the husband and he left a couple of plates on the husband back in order to hear him if he moved. But he hadn’t done the same with the wife. The wife was raped and the assailant left the couple alive, but he left behind a mark on the wall and that mark belonged to someone the police called the Infinity Rapist. This guy would target homes where couples lived and he would tie up the boyfriend while raping the girlfriend. And so the police believed they were looking for the same guy.

The Infinity Rapists was never caught or even identified. He did a series of rapes twenty years ago and then disappeared. The police never knew why he stopped and so they had every reason to believe that same man had picked up where he left off, but the detectives decided to check the old files just in case and luckily ADA Stone had them. His father had worked the case and borrowed them a week before he died. Hence why he was never able to return them. Stone had later found the files in his father’s things and there had been a picture of Stone as a little boy in the files. He remembered that he had been with his father practicing throwing a ball and he could even see his father in the photo. And so he didn’t know who took the picture or why it had been in the files.

Stone ignored the photos and went over the files with Carisi Together they were able to conclude that they weren’t after the original Infinity Rapist. The real guy had forced the women to pretend as they enjoyed it and they had to be lough enough that their partners who were tied up could hear them. This with the fact that the couple had been purposely targeted and the inclusion of the plates had shown that the man that targeted the Bakers had been a copycat. There were plenty of crazy people that admired the Infinity Rapist online and one of them had also managed to post about the latest rape before it was reported. The detectives followed that link back to Karl Patton and Patton had left everything out.

He didn’t even bother hiding the evidence and he was quick to admit to the rape, but he also wanted to confess to all the rapes. Patton was in his twenties and it was therefore impossible for him to be the Infinity Rapist. He was just crazy. He confessed to all the rapes and had genuinely believed that he the real deal. Except after a few hours and possibly some medication, Patton admitted on tv during an interview that he was new Infinity and that he deserved all the credit. The woman that interviewed Patton would later be targeted. Claire Newberry was raped and her husband was tied up with plates being put on his back to ensure he didn’t move. So the police questioned if they were looking at a new copycat or if Patton accidentally baited the real one to come out of retirement.

This latest rapist told Claire “I’m alive, you bitch”. He followed her and her husband into the apartment and forced them to comply by holding a knife to their throat, but by then the police had found out more information on the real guy. He had sent a letter to Stone’s father back in the day and more or less threatened Stone himself if his father hadn’t dropped the case. Ben Stone chose to send his kids out of town for the summer and he continued to look for the Infinity Rapists. They just never found him. Therefore, this guy and the fact he had made Claire fake it made everyone believe that this rape was carried out by the Infinity Rapist. And it made Stone believe that he gets justice for his father.

Everyone wanted to catch the Infinity Rapist, but he’s become smarter since the invention of DNA testing and so the detectives didn’t have anything to test from this latest rape. Only Carisi was inspired by those DNA websites and so he sent the sample that they did have on file to learnmylineage [dot] com. It even came back with a match. There was a close female relative living in Brooklyn and so the detectives to go speak to Amy Gardner. The only close relative she had was her sister and so she was asked about close male relatives that would be up there in age. Amy said that her mom has a brother named Uncle Edgar. Edgar was a sweetheart according to Amy. She said that he got married in ’94 and that his wife had recently passed away.

The information had matched the Infinity Rapist. It would explain why he stopped all of the sudden and so the detectives got Edgar’s address from Amy. She hadn’t wanted to hand it over because she wasn’t sure her sweet Uncle Edgar could have done any harm, but they got the address and the full name in the end. His name was Edgar Noone. He was working at a bodega when he was arrested and he had been so calm that the police were sure he was the guy. Edgar just refused to talk to them and eventually, his lawyer arrived. His lawyer was smart enough to realize that the police didn’t have a case without DNA and so the first thing he did was try to suppress the DNA the police had because they were only able to make a connection thanks to the website.

The police went looking for another way to get Edgar and so they spoke to Amy again. She remembered when her uncle used to live here and how he would wake up from nightmares. The nightmares stemmed from his own childhood. Edgar and his sister were locked inside their rooms when they were told to never make a sound by their father, but their father used that to force them into being witnesses as he raped their mother and so that’s how the Infinity Rapists came to want other people to be a hearing the rapes he himself carried out. And that wasn’t the only thing the police figured, they realized the reason the Infinity Rapist continue to contact Ben Stone was that Ben was the father he always wanted.

The police and ADA Stone used the information they had on Edgar’s supposed connection to Ben Stone to manipulate him. They said that Ben never cared about him. Not when he had his real family and couldn’t wait to be with them, but Edgar finally confessed to the rapes and being the Infinity Rapist because he said that he would watch Ben all the time and that he was the one that Ben loved. Ben couldn’t even make it home most nights before midnight because he was working the case and so Edgar said that he had more of Ben than ADA Stone ever could.

And you know what, Stone forgave his father for missing baseball games and not spending enough time with him because of his work. He saw that his father loved him in his own way and it was why he was willing to step up as Noah’s coach. Noah’s been asked where his father was and it made him feel bad that his dad was in heaven. His mom Benson didn’t know how to help and so it was a good thing when Stone began taking an interest.