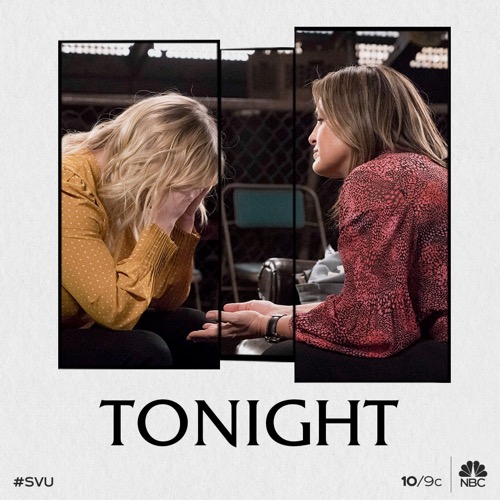 Tonight on NBC Law & Order SVU returns with an all-new Thursday, February 07, 2019, episode and we have your Law & Order SVU recap below. On tonight’s Law & Order SVU season 20 episode 14 called “The Flying Dutchman” as per the NBC synopsis, “Stone prosecutes the case of a woman who killed her abusive husband, and Benson and her squad wrestle with the duty of testifying against her.”

A woman walks into a bar at night, barefoot with a nightgown on. She sits down. Everyone rushes out. She sets a gun down on the table, takes her ring off. She has blood all over here. Later, Olivia meets with the woman Annabeth.

At court, Annabeth is painted as the devil by Stone. She shot her husband three times after a dinner party in their home. He was watching TV when she killed him in cold blood. Annabeth’s lawyer tells the court about a history of verbal and emotional abuse.

Rollins, Carisi, and Fin argue in the basement of the court, waiting to be called to the stand. All three are in dispute about what they will say on the stand when Stone questions them. Fin gets called first. Carisi admits to Rollins how he knew Annabeth’s husband, a cop. He was a jerk. They wait for Liv to show.

Liv arrives. They all get into what they plan to do and how they should handle it. He is a cop. Meanwhile, Fin is truthful on the stand and cannot say if Annabeth was raped by her husband. He verifies she shot her husband in the chest and crotch.

Carisi thinks they need to side with Annabeth. She had to kill him, it was the only way out for her. Rollins disagrees. Annabeth wasn’t in imminent danger. Carisi tells them about how he had to deal with a domestic abuse case. He went to the house over and over and in the end, the woman had her head bashed in. He gets called to the stand.

On the stand, Carisi adds to his answers, giving explanations. Stone corrects him and asks him to just answer the question.

In the waiting room, Rollins tells Liv she respects her. Liv tells Rollins she is sorry she had to watch her father beat the crap out of her mother. Rollins doesn’t see it like that. Her mother was weak even before her father beat her and she doesn’t want to be like her.

Carisi continues to anger Stone with his answers as he sits on the stand. They take a recess. Stone goes to see Liv. He shares his anger over Carisi. Liv knows he didn’t lie on the stand. Stone can’t say he did but he is ruining his case.

Liv tells Rollins that she has no idea what pure and utter terror is. Liv details it for her, the not breathing, cannot eat, you don’t close your eyes. You pray, Liv tells her. Rollins is sympathetic. But it isn’t the same thing, Liv being held hostage and Annabeth’s marriage.

Liv is happy she is just a rebuttal witness. Rollins gets called to the stand. She answers the questions she is asked, making Stone happy. Carisi sits in the court disgusted.

Annabeth takes the stand. She details how her husband kept his gun out at all times, he made her get rid of her friends and would yell at her for the tiniest of things. He accused her of flirting when she didn’t and she always had sex with her even when she didn’t want to.

In the waiting room, Liv tells Fin she doesn’t know what to do if she is called. He tells her about his recent fishing trip and how he got a fish that fought so hard to live he threw it back. Live knows what she needs to do. She is called to the stand.

On the stand, Liv is reminded by Stone to tell the truth. She is forced to tell the jury that Annabeth didn’t show remorse. She also said she was glad her husband was dead. She heads been praying for years. Liv looks in pain as Stone walk away from the stand. Annabeth knows she is in trouble following Liv’s damaging testimony.