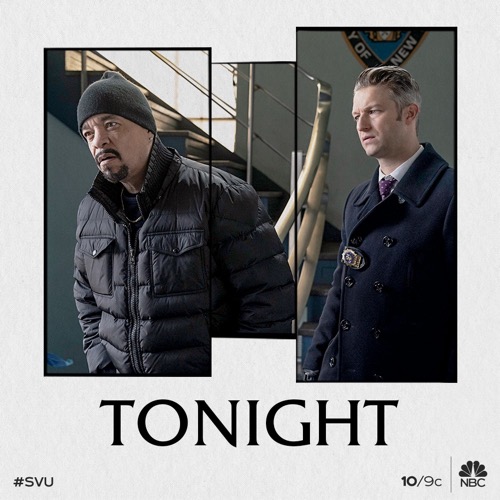 Tonight on NBC Law & Order SVU returns with an all-new Thursday, February 14, 2019, episode and we have your Law & Order SVU recap below. On tonight’s Law & Order SVU season, 20 episode 15 called “Brothel” as per the NBC synopsis, “Fin teams up with an old colleague to track down the proprietor of a pop-up brothel.”

A dead prostitute led the NYPD to a pop-up brothel. The people that operated the brothel agreed to rent out an apartment for more than its worth and in cash. They knew how to target slumlords who wouldn’t ask questions and in this case, it allowed them to run their brothel unimpeded. Their latest place had been working out for them when one of the girls turned on her pimp and tried to flee. She ran up the roof and one way or another she was fell from the said roof. The prostitute was later identified as Tori Meeks. She was a foster kid with a record. Tori was caught for soliciting and drug possession.

Tori agreed to go through a state-run rehab and in exchange, she didn’t have to serve any prison time. It should have been a moment she got clean, but her caseworker said she stopped showing up for meetings and that he never heard from her again. Tori was gone without a trace until she was found one morning next to a gun and a bleeding hand. The trail she had left in the blood was what led to the police finding the apartment and the many things that were left behind. The police even found someone’s shoe and it was just their luck that it was a Paretto. Paretto’s are custom made leather shoes that could be quite expensive and so not many people would have bought them.

The detectives went to Paretto’s and with the owner’s help they found out their shoe belonged to Mr. O’Connor. O’Connor was a rich guy living up on the Upper Eastside and he cracked under the slightest pressure. He said that he was living a boring life when he vented to a guy at a bar and was given a phone number to call. O’Connor describes how the brothel was called the “Dollhouse” and that he had been looking for a little excitement when he met Tori. Tori had seemed like a pro and her John didn’t figure out what she was up until she tied him to bed. He recalls how Tori then attacked her pimp and that she said she’d rather be dead than this.

Tori had been desperate to escape that night and so the police thought that they could be dealing with a human trafficking situation. They went over what O’Connor described and it had seemed like that the pimps, as well as everyone else, had been focusing on keeping Tori there at the brothel against her well. It also didn’t help that pimp quickly shut down his business and moved the girls once something happened to Torri. Alive she was a commodity and dead she was reliability, but Finn had a contact within Vice and he thought his old friend Detective Phoebe Baker could help them track down the brothel.

Finn visited his friend and he asked Baker to check to see if “Dollhouse” was ever mentioned by her contacts on the street. She did the search and she found it right off. The people behind it had created ads with the girls included and Tori was even still on the ad. Finn realized they had the right one when he saw Torri and he called the burner number attached by impersonating a potential john. He said he was looking for a good time and he had been given a location where he could “visit”. It had all been above board. They had gotten a warrant from a Judge Colfax who had presided over Tori’s and felt some sympathy for her. And so both SVU and Vice teamed up to make the final move.

Both squads moved on the new apartment. They had everything set and they went busting into an empty house. Somehow the brothel must have learned of what was going down and had moved on, but how did they find out? There were many options to consider and unfortunately the main one came between Finn and his friend. They were both told that the brothel must have gotten inside information and so either someone talked or it could be worse with someone working with the brothel. Baker didn’t want to consider a dirty cop and therefore the information they later learned was a bitter pill to swallow.

Baker had been with SVU when they were told that the gun found with Tori came out of the NYPD storage locker. It had been evidence in a Vice bust and so the detectives went down to see what was really in storage. They went through a whole thing with a guy claiming he didn’t mess up his job and it turns out that the gun was never put into evidence. Someone had placed a brick labeled as a gun into storage and so Baker found out which person in her squad had access to the evidence. She found out that there were three possibilities and she handed the names over to Finn. Finn and his squad then tailed the three detectives and despite Baker’s hopes – they found a dirty cop in her squad.

It was Detective Ramirez. He was seen letting the girls into a new apartment building and so Finn asked Baker to handle the warrant. She was supposed to call the judge and get his new signature, but before she could get it, there was movement at the house and the girls had been running out. They had gotten tipped off again and Ramirez had gotten away. Everyone figured he wasn’t the only one that was dirty and Finn suspected his friend. He thought Baker could have tipped them off when she stepped away and so he shut her own as his squad ran the investigation. They had managed to arrest one girl that had been left for dead at the apartment and they got her to say what happened to her.

She had apparently been in some trouble with the law when she was sent to rehab and she said she later met a female detective at a NA meeting. This detective claimed to have been an addict and she said she could. The dirty cop then took this girl to a house and offered her drugs. Once she was back deep into her addiction, she was informed that she had to work for those drugs and that’s when this girl was pimped out. She was forced into sex, given drugs, and told if she ever ran away that she would be arrested for parole violation. She said the cop called herself “Fe” and she was shown a picture of Baker, but she said Baker wasn’t this “Fe”.

Finn went back to his friend with an apology and together they worked out a plan for Ramirez. Ramirez was tricked into believing that the girl that got away was offered the chance to give up names and turned it down, so he went to his partners and told him what happened. The detectives that were following him saw he meet up with Judge Cofax. The judge had access to young girls that were going through the program and he must have handed them over to the dirty cops. So SVU arrested everyone! They arrested the dirty detective who gave up his partners. Among the partners was an Officer Felicia Taggert. And so she was “Fe”

As for the judge, he didn’t need to be pressure or even pushed. He proudly said that he never money for what he did and that he pointed out vulnerable girls because he wanted to protect them. The judge claims that they were prey to their addictions and would have gotten high anyways. He said he made sure that they were clean and that they got good doses. But while his variation of protection was warped, it was still understandable coming from a man like him. The judge lost a teenage daughter to addiction and so he believed that he had to protect them from themselves by giving them a way to get high safely. And the prostitution was pretty much an incentive to get others to take care of them.

The judge was going to face years in prison, but some of the girls he victimized did go on to reenter treatment and things will get better for them now that didn’t have to live down to one man’s expectations.