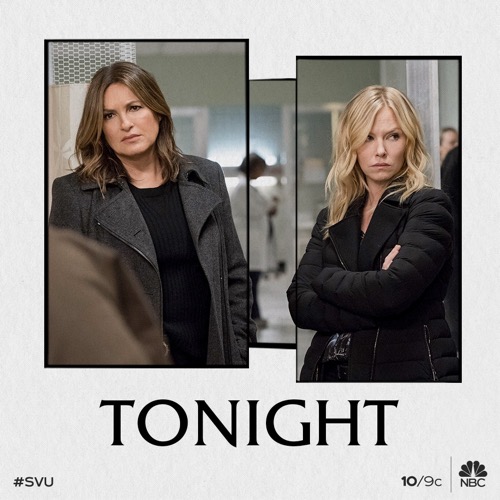 Tonight on NBC Law & Order SVU returns with an all-new Thursday, March 14, 2019, episode and we have your Law & Order SVU recap below. On tonight’s Law & Order SVU season, 20 episode 17 called “Missing” as per the NBC synopsis, “The SVU pursues a suspect when a child is discovered in the trunk of an abandoned car.”

The police found a little girl in the trunk of a car. She was found with her pants inside out and was taken to the hospital after the findings were reported to SVU. The little girl’s name was Bailey Shaw. She was six-years-old and was abducted the park. Bailey it seems was told to wait for her father as he went to the bathroom and instead she went with a stranger who pretended to be a friend of the family. This stranger gave her a candy apple and bit by bit he convinced her to get into his car. He told her that he was taking her home and he instead brought back to his place where they took off all of their clothes before taking a nap.

Nothing more transpired than some cuddling when they both took a nap. Things were shifting when Bailey woke up again and she moved back to the car, but that time she was put in the trunk and that’s where she stayed until the police found her. She was found because the man that had abducted her had gotten into a fight on the street with someone over parking. The police came by to make sure everyone was alright and they wanted to know why one of their suspects would run over. They searched his unlocked car and soon came upon Bailey. She was very lucky to have been found so soon and in relatively good health.

Bailey was abducted in plain view and it was odd how the kidnapper knew when to get to her. He was either watching her for a long time or he received insider knowledge. There could be someone in Bailey’s life that asked the kidnapper to take her and so SVU asked the parents about Bailey. She was born via a surrogate and one of her fathers had acted as the sperm donor and the other one had adopted her when she was born, but the fathers were asked about the surrogate. They said she was nice and Paige Black had appeared as someone that made peace with giving up her baby. She said she went through counseling and was guided by the agency the whole way.

Paige also said she’s had nothing to go with Bailey since Bailey was born and that had been a lie. There was a recent photo of Bailey as Paige’s background. She’s been sneaking in to see her and has been taking pictures because giving up a child was much harder than she thought, but there was no connection between Paige and the kidnapper and the guy they thought was a kidnapper was actually rather unlucky. The suspect had stolen the car from some place in Queens and so he wasn’t their kidnapper. He just stole a car with a child in the trunk and inadvertently led to her rescue. The car originally belonged to Emerson Mauer.

Emerson was a weird guy who couldn’t hold down a job and the only that had something nice to say about him was his mother. He hadn’t been at home when the police came knocking, but his mother was and she even revealed to the cops that her poor son had gotten his car stolen. It was just odd that Emerson never reported his car stolen. There was also the fact that he tried to run when he saw the cops and so they caught their guy. The detectives involved later showed a photo of Emerson to Bailey and she identified him as the guy she hung out with. She was having nightmares about what happened and was never going to forget his face.

But Bailey’s parents didn’t want her to further go through even more trauma. They didn’t want her to testify in court because they didn’t want a defense attorney to attack her or risk her being ridiculed at school. They wanted her to be able to move past what happened and so the police were going to need something else to get a conviction. They got a warrant for Emerson’s home and they dug through everything. It led them to find a skeleton buried in Emerson’s backyard and the bones belonged to that of a child. And so that’s when Emerson’s mother began to crack because she said her ex-husband did that.

According to Rowan Mauer, her ex-husband was an evil bastard and then she accidentally revealed it was like father like son. The detectives knew that Emerson was a predator working his way up to something and he could have gotten it from his father. The father had done a runner years ago and so all they had was Rowan making accusations through the bones in the backyard had been old. Too old for Emerson to have done it and so it looks like his father was a pedophile as well. There was also another coincidence because the police found DNA from Kevin Brown at the house and the little boy was abducted from a park when he was small. He was kidnapped back in the 90s and so it must have been Emerson’s father that took him.

The police believed the skeleton was Kevin Brown and they even informed his last living relative that his remains might have been found, but it still didn’t help them with Emerson’s case. They suspected why Emerson became what he was and so all they needed was proof of Bailey’s kidnapping to put him away. The best chance they had of this was his mother. Rowan couldn’t stop talking once she gotten started and she agreed to testify in front of a grand jury that her son kidnapped Bailey. She had found the two of them in bed together when she expectedly came home early and she told her son to get rid of the little girl. She went as far as to tell him to put Bailey in the trunk so that the girl couldn’t retrace her steps.

Rowan testified to everything she told her son to do when she found out he had kidnapped a child, but she withheld some important information about Emerson himself. He wasn’t Rowan’s real child. Her real son was the body in the backyard and the young man she’s been raising was actually Kevin Brown.

Rowan was threatened with life in prison if she didn’t reveal the truth about her “son” and so that’s when the whole sorry tale came out. She had gotten into a drunken fight with her ex-husband Zac and it led to her son falling down the stairs. The real Emmerson died immediately. His parents didn’t want to get into any trouble and so they hid the real Emmerson but kidnapped Kevin Brown who looked just like her son to replace the one she lost and even after it all came out Rowan tried to justify her actions. She deserved a child because Kevin’s real mother let him do whatever he liked with his sister. And so Lt. Benson brought in the sister Diane.

Diane confronted this woman that destroyed her family and called her mother unfit, but the truth was the Browns’ mother was dying and her husband was working all the time to afford treatment.

Kevin Brown did what he did to Bailey because he was trying to take care of the child. He used to sneak into his big sister’s bed whenever he had a bad dream and he would hold her close. Kevin was so traumatized that he tried to recreate that with another little girl, but now it was too late for him. Kevin refused to listen to the truth and he didn’t even want to hear about Diane. Diane for her part had realized she lost her brother decades ago and she didn’t want to keep trying with the man he became.