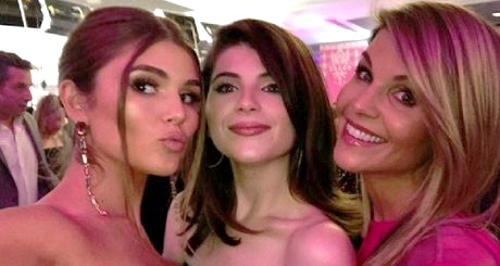 Lori Loughlin’s daughters Olivia Jade Giannulli and Isabella Giannulli won’t be going back to class at the University of Southern California anytime soon. That’s because the two girls have endured so much bullying in the last week that they’ve decided to quit their college careers. This comes after their parents, Soap alum Lori Loughlin and her husband Mossimo Giannulli have been indicted in the college bribery scandal that has rocked the nation.

According to TMZ, Lori and Mossimo allegedly paid $500,000 to have their daughters designated at sports recruits for the crew team even though they weren’t athletes. However, the two girls took pictures of themselves pretending to be on a crew team.

Now insiders tell the site that Olivia Jade and Isabella are well aware of all the hate they’ve been getting online and are worried that if they go back to school, they will get viciously bullied by their peers.

What’s more, both young ladies have hinted that they didn’t want to go to college in the first place. Olivia Jade, who is also a YouTube personality and social media influencer, has said in her vlogs that she only wanted to go to college for the “game days and parties.” That is one of the reasons why her father Mossimo wanted her to go to any college but Arizona State University, knowing all too well that it’s one of the biggest party schools in the nation.

As far as their futures are concerned, things aren’t looking so bright. Olivia Jade has been dropped by Sephora as the company has severed all ties with her and their partnership. The young ladies also won’t be enrolling in a new school anytime soon. The insider also told TMZ that Olivia Jade is taking things particularly hard as she is “a mess, despondent and feeling like it’s the end of the world.”

Loughlin, along with fellow Hollywood actress Felicity Huffman and about 50 other parents have been indicted in what many are calling the largest admissions scam prosecuted by the Department of Justice. So far Lori Loughlin herself hasn’t made any comments about the allegations. In the meantime, don’t forget to check back with CDL for all the latest news and updates on your favorite celebrities right here.