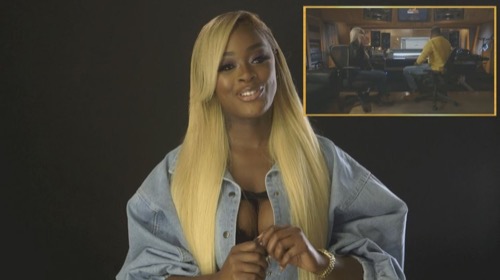 Tonight on VH1’s hit series Love & Hip Hop New York returns with an all-new Monday, February 4,  2019, episode and we have your Love & Hip Hop New York recap below for you.  On tonight’s season 9 episode 10, “Crease The Timbs,” as per the VH1 synopsis, “ Maino Confronts Maggie & Sidney Starr Visits a Surgeon.  The cast reacts to Maino getting real with Maggie about whether or not she has a future in the music industry and Sidney Starr’s gender reassignment surgery .”

Rich and Ashley sit and talk about Miracle’s trial at a restaurant in Mississippi. They talk about college. Rich tells her she is going. She might want to stay behind and care for her siblings but she cannot. Ashley gets emotional. She needs her mom.

At Kimbella and Juelz’s house, Juelz is spending all the time he can with the kids. They make cards for Kimbella while she is out with her friends. Juelz thinks it is time to buy Kimbella a ring and propose.

Maggie is feeling better since Maino brought her back to the club where she was shot. He shows up at her hair shop. She wants to talk to him about trying to get into music again. She knows he is working on a few of his own songs and she wants to be on it. He is hesitant.

Sidney has finally made the first appointment for her sex surgery. She has been taking hormones for 15 years. She arrives at the doctors office. The doctor tells Sidney what she can expect to happen in surgery and the risks. She is nervous and didn’t know so many things could go wrong. He also tells her it is going to be $30-$40k.

Sidney goes to meet Mariah. They have been talking since the winery. They talk about Nya quickly. Mariah thinks they all looked bad. But she wants to move on. They talk about Sidney’s surgery. She doesn’t know how to pay for it. Mariah tells her she needs to make a record to make some money.

Jonathan meets with Maggie. They talk about the winery. Maggie cannot believe it all. Alexis shows up to meet them. She tells them about her recent shooting. Maggie explains how she was shot before. Alexis tells them about how she is going to work in the studio with Maino on the same track Maggie asked him to be a part of earlier.

Rich and Jaquae meet up. Rich tells him about Miracle. Nya shows up. She tells Rich she is all done with Sidney. She gives him the rundown on the last week. Rich understands and tells Nya is ready to help her now. She is thrilled.

Alexis shows up at the studio to meet Maino. She tells him she has been given a bunch of empty promises and has come to him to turn things around. Maggie shows up as they listen to Maino’s song. He is surprised to see her.

Alexis excuses herself. Maino and Maggie get into it. Maggie is mad he didn’t ask her to be on his track. She hates that he hasn’t supported her with her music and has pushed her to pursue other avenues. He tells her she never really showed him her serious side about music.

Juelz sits with his mom to eat dinner. They talk about his upcoming shows. He tells her he plans to ask Kim to marry him. She wonders if that is a good idea given that Kim doesn’t get along with his brother Jermaine. With him going away they all need to be reunited.

Rich meets with Sidney. He is surprised to see Mariah with her. He asks her if she brought reinforcements. He snaps at her about all he heard. He isn’t happy Mariah is there either and she senses it. She tells him it is okay when she is in his bed. Maino admits he sleeps with Mariah here and there. They listen to Sidney song. Rich thinks it sounds good. Mariah gets up and leaves. Rich tells Sidney – “see what you did.”

Maggie has hooked up in the studio with an old friend. She is going to do her and forget about whether or not Maino is supporting her.

After recording Hollywood Play’s last song, he is gunned down in the street in New York. Maggie and the others come together to remember him. Nya gets teary eyed and tells Maggie and Jaquae she loves