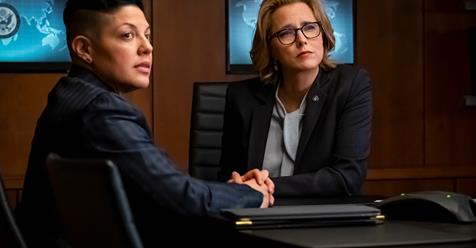 Liz gives a speech in front of the team. It is about climate change. Daisy thinks its a tad dreary but Liz thinks they need to fo there. President Demko calls Liz. It’s urgent. Demko isn’t happy with the immigrants he has accepted that are rioting. Liz and Kat think he is trying to shake them down for more aid. They tell him they will get back to him.

Stevie meets Ally who has new shoes for her after she broke a heel. At the cafe, Morejon’s son, Liz’s arch enemy, comes over and kisses Ally after bringing her lunch. Stevie is in awe and tells Ally after he walks away from that she needs to tell mom.

Liz gets word that more countries are pulling out of the Climate Change Symposium. Liz reaches out to an activist named Lena who lives in Poland. She is a citizen there as well as one of the US. She is going to use her to rattle Demko. The next day the activist heads to leave her home when she is gunned down in the street.

At the office, the next day, POTUS and the others tell Liz this all looks like an inside job. Lena is alright, she has survived. POTUS wonders who they are working with. Liz wants to try and draw Demko out. She video chats with him. He gives her two patsies and plays her. She heads back POTUS and the others and tells them they need to get Lena out. They all object. Henry backs Liz. They put together a mission and send a team in to get Lena out of there. It is a success. Russell isn’t happy even though they saved Lena. The symposium is days away and they need to smooth this all over.

Poland invokes Article Five, stating that the US assaulted them. Liz and Jay try to talk to one of their representatives about how ridiculous this is. He tells Liz to smooth things over with Demko. Do whatever it takes.

Liz chats with Demko and tells him he is going to publicly arrest the men who did this and also suggests he resign or she will go public with what she knows. He explodes and hangs up.

Russell meets with Owen. Their meeting goes sideways which upsets Russell who was hoping to get the Senator on his and Liz’s side with policies. Meanwhile, Liz and Henry find out about Ally’s new boyfriend. The entire family gets into an argument.

Owen appears in an interview on TV, bashing the current agenda making Liz and the administration look bad as he advocates for nationalism.

Henry meets with Morejon to talk about the kids. They both agree that the kids are off limits. Henry brings up Owen who is backing Poland. Henry warns this senator is bad. Morejon is reluctant to agree he is a threat but Henry pushes on.

Nina is brought chocolate from 5 different countries from the US Ambassador who snapped at her. They talk. He tells her she needs to stand up for herself. She explains she is the first one to go to college in her family who has a lot of medical needs. She admits she hates chocolate. They laugh.

Morejon calls Liz and tells her he will support her publicly with the sanctions. Sh heads home to find an upset Ally who has broken up with Lucas. They talk. Liz didn’t want that. Ally thinks she will call him.

Liz meets with the ambassador. She tells him she needs her speech to be read but not by him. Lena is brought into the room. He understands.

At the symposium, Lena gives Matt’s speech. It receives a strong positive response. Russell is thrilled. Demko sits in his office with more than 100,000 protestors outside.

At home, Lena joins the McCords for a polish meal and listens to Ally and Lucas’ song. Later, Liz and Henry talk. It is time she announces her run for president after talking Lena into running for Poland’s new opening.

Liz meets with POTUS in the office to tell him the news. He smiles. They sit for a celebratory drink.