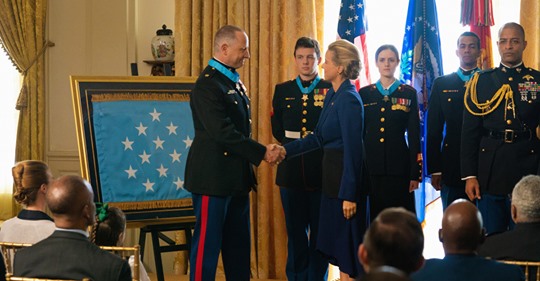 Six Months Earlier – Liz and Daisy knock on doors in a swing state trying to collect last-minute votes on Election Day. They meet a man named Barry who just pulled a double at work and has no car because his son drove it with the parking bark on. They bring him to his local polls while talking to him about who he will vote for.

Present Day – Liz and Henry walk through the White House with their new dog who is being bad. The dog knocks over a man with a bust, a priceless piece of history. Liz can’t believe it. Before she can get upset, she is called in to hear bad news about Daisy.

Daisy is in trouble for receiving illegal documents from a French woman regarding a senator Liz ran against. The senator had an affair and Daisy is being suspected of leaking that information. Liz isn’t happy, naturally, and wants to get to the bottom of it.

Dalton arrives at the White House to visit. He has grown out his hair and is writing an album. Liz gets word that they may have found the French woman who gave Daisy the information but now she is gone. Russell needs her to get ahead of this. Liz calls Daisy to meet her alone. Daisy tells Liz she did nothing wrong. She didn’t know the French woman would be working for Iran. But she needed to protect Liz. She hands in her resignation. Liz won’t take it. She tells Mike B. this and he isn’t happy. Russell seems to support Liz’s decision. Mike wants to drop Daisy.

Liz heads home to see Henry. They debate about the reporter who leaked the story about the senator. They also wonder about Conrad and if he is all right.

At the press conference the next day, Angela covers for Daisy. The reporter who leaked the story arrives and asks Angela to talk to Mike B. She tells him she isn’t going to the hearing and she won’t give up her source even if she goes to jail.

Liz takes the podium at the White House to discuss Daisy’s situation. The press wants to know where the reporter is who leaked the story. Liz doesn’t answer. They all get up and leave.

Later that night, Liz, Henry, Russell, and Conrad have dinner. The reporter is in jail and Liz doesn’t know what to do. Conrad shares that he is joining UNICEF and will be a grandfather soon.

Henry tells Liz she could pardon the reporter. Liz doesn’t want to, she wants to get to the truth. Daisy turns on the TV to hear talk of impeachment.

Russell waits for a senator who has been running the investigation. He was the one who said the word impeachment on TV last night. Russell tells him he is playing with fire.

Stevie and Liz have breakfast. Stevie asks if the reporter is still in jail. Henry come comes in. They watch Conrad give an interview on TV. He talks about Liz and how he trusts her and how she will get through all of this sexist crap.

Liz and Henry talk again about what she plans to do with Daisy. The next day, Liz takes the podium once again to talk to the press. She presents Conrad’s portrait before welcoming Conrad up to talk about UNICEF.

After, Liz thanks Conrad for defending her on TV. He tells her she is doing just fine. Meanwhile, Daisy takes the podium to address the press. She tells them she has resigned. Liz watches sadly from the other room. Daisy also tells them that the reporter who was jailed has been pardoned by Liz.

Stevie arrives late but just in time to see Dmitri become a US citizen. Liz meets secretly with the reporter who tells her Daisy wasn’t her source.