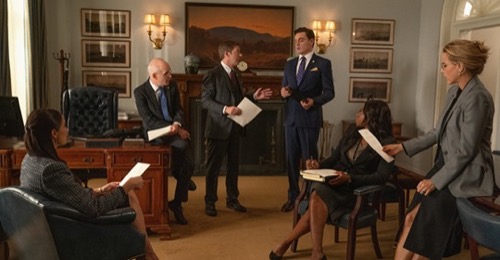 Also, with the imminent threat of impeachment looming over the McCord administration, Elizabeth and Henry make a wish-list of things to do while she’s still in office.”

Liz is with her team listening to an update. Beijing has had a special interest in the small island and she likes to move up I’ll fly by to see what they’re up to. She also addresses the impeachment hearings and asks if anyone has any questions. No one has anything to say. After they leave, Mike tells Liz she has to do something, she’s losing the public’s approval.

Later that night, Liz sits in the oval. Henry comes down to ask her if she wants to eat dinner but she tells him she doesn’t want to leave the room. She wants to take it all in while she can. She yells out to Blake to go home but he won’t leave until she is gone. Liz and Henry make a list of what they want to do in the White House for fun while they can. Stevie arrives and gives them the good news, she is going to propose to Dimitri. They are thrilled.

The next day Liz is in a great mood and ready to seize the day. She has a long to-do list that concerns Russell. He reminds her that Congress is not backing her at the moment and she’s taking on way too much. But Liz doesn’t care. She is going to keep pushing forward.

Dimitri arrives to see Henry. He breaks the news that he wants to get his blessing because he plans on proposing to Stevie. Later, Liz and Henry talk about what they should do about Stevie and Dimitri. Henry doesn’t think they should do anything.

The next day, Henry meets with a congressman he’s known for a long time to help Liz. Henry talks to him about why he isn’t running interference during the impeachment hearings when Senator Canning makes unsubstantiated comments. The congressman needs to do what is right for him and the unions he represents, speaking up wouldn’t be in his best interest. Henry is very disappointed with this.

Liz arrives at the impeachment hearings to speak on her own behalf. She discusses how she has done nothing but cooperates. Liz handles all of the questions well, frustrating Canning but she is interrupted in regards to the Chinese problem with the islands. They have opened fire and there have been many casualties. Liz leaves immediately, upsetting Canning. In the war room, everyone wants to move forward with retaliation but Liz needs to speak to the president first as they have killed many of their sailors. Liz thinks pursuing would be gratuitous.

Liz calls President Li. He isn’t looking to back down forcing Liz’s hand. It looks like they could be going to war. Liz wants to run this by Congress, making them a united front. Russell thinks that might be a bad idea but of course he’ll do it at her request. The news of this comes out during Stevie and Dimitri’s dinner. Secret service cuts their dinner short. Stevie is needed at the White House.

Liz is in the war room and being told by her team that it is in her best interest to react and quickly. Liz decides not to go to war but to try several other options. Stevie and Dimitri arrive to see Liz and Henry popping champagne because they are unaware that either side proposed. Stevie breaks, proposing to Dimitri in front of her parents first with a fortune cookie. Dimitri takes over, proposing to Stevie. Just as he kneels was with the ring Russell comes storming in to get Liz. Things have become worse, her blockade is not working.

Liz takes off to go surprised, Chen. Chen admits that it was a rogue commander who begins all of this but the president won’t back down to the honor and the fact that Liz is a woman. Liz is willing to back her ships up further away from the quarantine line but not back down. Hopefully, the president sees this as the US blinking first, it’ll save him some pride and honor and there will be no war. Later, in the war room, Liz and the rest of her team watch is both sides back down.

The next day, at the impeachment hearings Liz is accused of creating this supposed war to take away from these hearings. Henry’s long-time friend, the congressman, explodes he cannot take this anymore. This is all a bunch of hoopla, he tells the entire quart room as he goes on to defend Liz, angering Canning.

The next day, Liz and Henry wake to millions of protesters. They want Liz to stay in her position as the president! Liz is overcome with emotion.