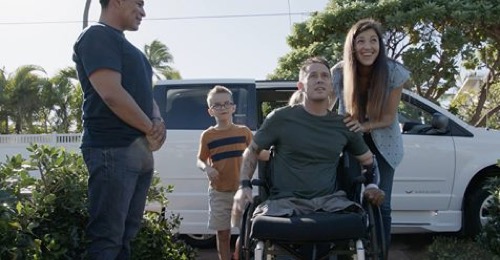 Tonight on CBS their reboot of the classic series Magnum P.I. premieres with an all-new Monday, March 4, 2019, episode and we have your Magnum P.I. recap below.  On tonight’s Magnum P.I. season 1 episode 17, “Black is the Widow,” as per the CBS synopsis, “After a man is murdered, Magnum poses as a doctor on the same dating app the victim was using in order to find the killer who may be praying on wealthy men.”

Magnum is on a date on the beach with a blonde who thinks he is a surgeon. She is happy they met on the dating website. Usually, they go bad. Just then, a local who knows Magnum calls to him, ruining Magnum’s story. The woman storms off. There goes his lead in a murder investigation.

TC, Rick, and Higgins hang out with their little league team. Rick got a well known Major League star to come to visit.

Magnum meets with a teen girl who needs his help. Her dad Roland was murdered a week ago in a carjacking. That same day before he died he took $1 million out of his bank account. Magnum heads to see Katsumoto who gives Magnum something to think about when he asks why the daughter was not willed the money. He also heard that the money was to be given to charity.

Magnum has Higgins look into Karen’s bank accounts. She doesn’t have the money. They head to Roland’s home and go through his computer. He was online dating and had a thing for blondes. A blonde in the bank surveillance video becomes a person of interest. They show Karen when she returns home, surprised to find them. All they had to do is ask to come over they didn’t need to break in. Higgins and Magnum head to track down the blonde.

Later, Higgins comes home to find TC, Rick and Magnum creating an online dating profile for Magnum so he can interrogate some of the blondes who showed an interest in Roland. After making a few jokes, TC and Rick head out to find Roland’s car.

Higgins and Kamu play chess while Magnum digs through the library on surgery books so he can make himself look like a surgeon on his dates. After falling asleep while studying, Magnum gets alerts from several blonde women.

The next day, he gets ready for his date with a woman. Higgins seems a wee jealous even if she won’t admit it. He tells her she should date, sharing how it took him a while to decide to be open to love again after heartbreak.

Magnum heads out on his first date. It takes a few dates before he finds his suspect Abby, who seems absolutely perfect for him. He follows her after she tells them they aren’t a match. She meets with a man who fits the description of Roland’s carjacker. Abby hands him money.

Magnum and Higgins talk to Katsumoto who will run the man’s photo through the system. Later, Abby shows up angry. That man is her witness and she doesn’t know why Magnum is looking into her but she isn’t guilty of anything and neither is her client. She storms off, telling him to leave her alone.

TC and Rick find out Roland’s car have been shipped overseas. They use the chopper to hover over the barge carrying the car, dropping down to have a forensic friend run prints.

Higgins has come across some evidence that indicates Cleo, a woman Magnum dated during the investigation, could be their black widow. They alert Katsumoto who finds Cleo moments later trying to flee with a man. The man takes Katsumoto’s gun and brings him to the marina where they plan to escape on a boat. Before they can escape, Magnum and Higgins arrive. They stop Cleo and the man, who is her husband.

Karen gets the money back and follows her father’s wishes, donating the money to research. Her dad leaves her a video telling her about how her mother died of an orphan disease and he has been trying to help find a cure.

Magnum goes to see Abby to say sorry and bring her flowers. He asks her out on a date. He tells her his isn’t fancy or a doctor. She accepts.

At home, Magnum finds Higgins headed out on a date with the Major League baseball star in town. He is surprised but impressed. The guy is a national MVP star.