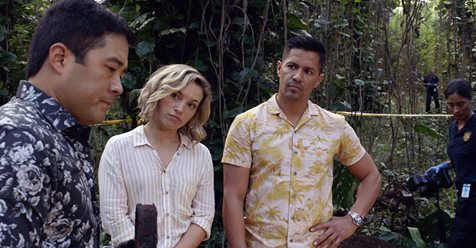 Tonight on CBS their reboot of the classic series Magnum P.I. premieres with an all-new Monday, March 11, 2019, episode and we have your Magnum P.I. recap below.  On tonight’s Magnum P.I. season 1 episode 18, “A Kiss Before Dying,” as per the CBS synopsis, “The Dobermans dig up what appears to be a human bone, and Magnum and Higgins help Katsumoto investigate the murder of his former mentor.”

The dogs found something. They found a bone that didn’t seem like it belonged to another animal and so if the experts had to guess then the that bone was human. Someone’s remains were out in the forest. The dogs had come across them when they went missing for two hours and so the remains couldn’t have been buried deep. It must have been a soft soil grave. As in whoever buried the body didn’t go as far as the harder soil at the bottom and they chose to dig a shallow grave as it was easier on them. But the fact that a case was so near to home was too much for even Magnum to resist. He enlisted the help of Higgins and together they went out in the forest searching for graves. It took them some time however they found what they were looking for.

They found the grave. The grave had both human and animal remains. The animal was clearly a dog that had been shot in the head and it was believed he was buried with his master. Magnum called the police when they found the grave and Katsumoto had been grateful for the call, but not for reasons Magnum believed. It seems the detective has been looking for a missing HPD officer. The officer was Katsumoto’s first partner on the job and he owed him one. Stan has been the ranking officer and it was his job to show Katsumoto around. Katsumoto didn’t use to be that great at listening because one day he ignored Stan’s orders and someone almost died. A domestic situation took a turn for the worst and Stan had stepped in to cover for Katsumoto’s mistake.

Stan never held what happened against Katsumoto. He didn’t even bring it up because he knew that Katsumoto had learned from the encounter and would never allow such a situation to happen again. Which was true. Katsumoto credits becoming a better cop to Stan and its why Stan’s disappearance has always haunted him. He remembers getting the call about how Stan took the dog for a walk and then never came back. There had been some that questioned if Stan could have gone over a cliff by accident and so the story didn’t true to Katsumoto. He asked around and he learned that Stan had closed a case two days before he disappeared, but what he didn’t know was that Stan began a new investigation right afterward.

Katsumoto went over to Stan’s home to pay his condolences to the window and it was as he there that he thought to look around. That’s when he found Stan’s notes. Stan opened an investigation on the day he disappeared with his dog. The only thing left of this mysterious investigation that no other person knew about was Stan’s notes and Katsumoto was just going through them when his boss. It turns out no one wants Katsumoto investigated a murder so personal. The boss asked Katsumoto to take a few days off because he has vacation time coming to him and so Katsumoto agreed to take the time, but he instead brought over Stan’s things to his home and was going through them when he was interrupted.

Magnum was a man that liked to finish what he started and he wanted to wrap up this case. He went over to Katsumoto’s because he knew what happened and figured the detective would make a good partner. Magnum asked Katsumoto to team up with him and unfortunately, Katsumoto couldn’t say. The detective was without resources and he needed someone in his corner as went about investigating Stan’s last case. Stan had been looking into a missing teenage girl. The girl, Vanessa, disappeared seven years ago and no one has heard from her since. Her boyfriend and his friend were questioned over this and they hadn’t said anything when she first disappeared. And so nothing jumped out at them until they talked to Stan.

Stan had gone to see the two young men about their recollection around the time Vanessa went missing. The guys said that in hindsight that there had been something off with Vanessa’s relationship with their math teacher Mr. Caputo. Caputo offered to tutor her a lot and there was a lot of text messages back and forth. The teacher paid her a lot of extra attention and it didn’t seem odd at first because the teacher was very popular around school, but then the guys grew up and they said they realized that there was something strange about Caputo. The teacher left not long before Vanessa disappeared and there was no firm reason why he left. He was there one day and gone the next. And so it took some time before the kids at school started to hear rumors about an inappropriate relationship.

Both Magnum and Katsumoto thought that this teacher was their chief suspect and so they first tried to find Vanessa’s body. It was what Stan was doing when he died. Stan’s dog was specially trained to sniff out cadavers and so the guys used mosquito tracking to find Vanessa’s body in the forest. She wasn’t hidden or anything and Magnum found her when he was knocked out. Someone had snuck behind and hit him over his head. Therefore, by time Magnum came to and alerted Katsumoto, Vanessa’s remains had been moved. They didn’t where she could have been taken and so they questioned why. The person that killed Stan would have only done it because he came to close to the murderer and spooked him. And so the guys realized they must have done the same.

They searched what used to be Vanessa’s grave and they found a cellphone. The phone was charged up and they found several photos of Vanessa with her boyfriend’s best friend, but when they went to question Mike Trevino Jr., he was gone and his father was doing his best to cover for him. The older man claimed that he didn’t know where Junior went and the seasoned detectives knew better. They sped to the airport and stopped Junior from getting on a flight to a non-extradition country. They also brought him to the police where Katsumoto got a full confession. It seems Vanessa’s death had been an accident. She had gotten into a fight with Junior when she fell and hit her head. And so the kid tried to cover it up until Stan came sniffing around.

Stan must have suspected something off about the kid and that’s why he looked into him, but the actions in resulted in Stan’s death because was so afraid of what could happen that he followed Stan and killed for getting too close.

Katsumoto was thankful to close this case and they found Vanessa’s remains again. So all that was left was thanking Magnum because the maverick really did pull through for him.

Rick and TC hadn’t participated in this case because they were watching over someone for a “friend”, but they too found closure when they helped reunite a mother and daughter that hadn’t seen each other in years.