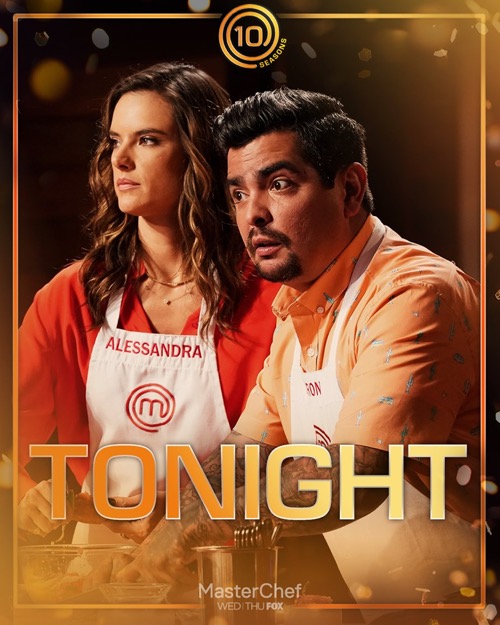 Tonight on FOX Gordon Ramsay’s Masterchef returns with an all-new season on Wednesday, June 26, 2019, season 10 episode 6 called “Hot & Spicy,” and we have your weekly Masterchef recap below.

On tonight’s Masterchef episode as per the FOX synopsis, “The Top 17 remaining home cooks compete in a mystery box challenge inspired by special guest Alessandra Ambrosio; the judges throw the contestants a curveball and they must use all of their skills to win.”

The judges promised that things will get tougher as the show goes on and, boy, did they deliver with their latest Mystery Box Challenge.

Alessandra Ambrosio was the guest judge for the event and as secrets were her thing she got to be there when the secret ingredient was unveiled. Tonight’s Mystery Box held the staple proteins in Latin cuisine. There were red snapper, prawns, octopus, skirt steak, and swordfish and in honor of Alessandra the contestants also had to create a Latin inspired dish. Some of the contestants have actually worked with worth or experimented with such dishes and so they weren’t concerned about the challenge, but others allowed their experience to make them cocky. There was a certain contestant that thought he knew what was best and he didn’t want to accept help from anyone. Not even from the judges and they were there to help him.

Others like Shari were frightened. They didn’t cook Latin dishes at her house or have ever tried it and so she had to step out of her comfort zone of making curry. She was trying something new tonight and so were many others. Wuta, for instance, was creating a puree out of a hard vegetable/fruit (who really knows what yucca is) and he had never done that before. The judges tried to steer him in the right decoration because the ingredient could go very horrible and he at least took their advice. So everyone thought that they were doing good and right as they were putting the finishing touches – that’s when they were told that there was another surprise. The judge said that they had to raise the bar with Season 10 and so now they wanted a Latin inspired ceviche.

Nevermind that such a dish could easily trip them up, but the judges made their demands with little time left on the clock and so the contestants just had to get to cooking. They ran around trying to figure out what to do with their ceviche to make it stand out and some of the contestants were cracking under the pressure. Bri was a planner and the ceviche threw her for a loop. She began panicking and she was soon joined by Fred. Fred confessed that he was letting his anxiety get to him and it was even causing him to doubt his dish. Then there was Michael that left his plating to the very last minute. He said he did it on purpose because he needed all the time he could get to get the dishes right. And so he took the biggest risk of them all.

When the time was called, the judges said goodbye to Alessandra and then got to the business of tasting the dishes. They tasted every plate because there were only going to be three dishes that they were going to highlight, but they were also going to be dishes that they named as the worst. Sam, Liz, and Fred had the worst dishes of the night. Fred’s was the worst because he included inedible seeds and so he was lucky that it wasn’t an Elimination Challenge. Meanwhile, the judges named the dishes that warranted an extra taste. The first call down Evan. Evan created Chipotle Marinated Steak with Torched Corn Salad and Snapper Ceviche. He was the one that ignored the judges and so he got lucky as well because the judges truly did enjoy his creation. If anything, they just wish he had listened to them because then his dish would have been perfect.

The second dish they called was Michael’s. Michael created Grilled Prawn with Passion Fruit and Pear Salsa and Snapper Ceviche with Kumquat. It looked beautiful and they enjoyed it, but Michael should have added extra salt throughout his dish. If he had then it would have been perfect and so Michael just barely missed out. As for the final dish the judges called, it had been Shari’s. Shari created Pan-Seared Red Snapper with Salsa Verde and Nopales Salad and Shrimp Ceviche. It was another great dish that had been plated well and the judges loved her ceviche. They said it was the best part of her dish. So Shari didn’t do too bad having to step out of her comfort zone. The judges said they couldn’t wait to see what else she was capable of and they kept that ceviche on their minds as they called down the next dish.

They next called Nick. Nick created Brazilian Cheese Bread Taco with Grilled Skirt Steak and Corn Salsa and Snapper Ceviche. The judges enjoyed the dish itself although they did think he went heavy-handed on the scotch bonnet in his ceviche. The rest of his dish had been bold and so that’s what the judges will remember. They called for Bri next. She was worrying Pan-Seared Snapper with Cilantro and Coconut Foam and Red Snapper Ceviche. Her ceviche had been perfect and so the problems lied in her main dish because the potatoes weren’t great and she could have found something else. And so the final dish they called down was Wuta’s. he created a Pan-Seared Swordfish with Black Beans and Yucca and Swordfish Ceviche.

Wuta had been proud of his dish even if he had to taste things by putting them in his mouth and spitting them back out. But tonight was probably Wuta’s best night in the kitchen. He elevated his ingredients and he was getting better at plating. It seems to bring out the best in Wuta, the judges keep needing to bring in supermodels!

Now, the judges chose the winners of this challenge by each picking their favorite dish and these three contestants would be safe in the Elimination Challenge tomorrow night.

Gordon chose Shari, Aaron chose Nick, and Joe chose Wuta. There were some that felt their dish was better, but maybe Evan will listen next time when the judges offer him their wisdom.