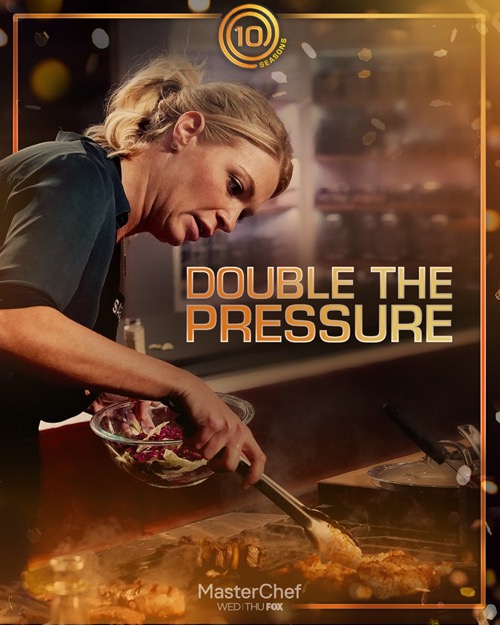 Tonight on FOX Gordon Ramsay’s Masterchef returns with an all-new season on Thursday, July 11, 2019, season 10 episode 9 called “Tag Team Tears & Tantrums,” and we have your weekly Masterchef recap below.

On tonight’s Masterchef episode as per the FOX synopsis, “With two eliminations on the line, the pressure is on for the losing team in one of the series’ most daunting challenges: the tag-team challenge.

The home cooks’ taste buds go on an extraordinary world tour as they are tasked with creating dishes inspired by the MASTERCHEF shows aired around the world. In just 75 minutes, the home cooks will go around the world, creating a platter featuring meals from the Philippine Islands, India, Italy, Mexico, Morocco, and China.”

The Blue Team lost the latest Team Challenge. They failed to recreate three signature dishes from Joe’s restaurant and so tonight they got thrown back into the kitchen. Not only that, but they were also forced to wear black aprons again and so there really was no confusion about what came next. The next part was the punishment for the Blue’s Team for losing. They were informed that they would have to work in a Tag Team Challenge and those are the worst. It was all about communication which isn’t always easy in the kitchen. There were some from the Blue Team that were known to crack under pressure and there was no place for anyone like that to hide in such a challenge.

Also, they didn’t even get to pick their own teams. Nick was captain of the winning Red Team had been the one to pick for everyone and he did his best to knock people out. He paired the panic(ers) like Liz, Sarah, and Subha with level-headed people that Nick was hoping they would sick. Subha was paired with Dorian and Dorian actually accused Nick of sabotage. Nick tried to deny it. He said that Subha was a great cook and no one is denying that. There’s just an issue that everyone that has worked with Subha has complained about – they never know what he is doing. Subha operates at his own pace and the half time he’s getting in his own team’s way. It was almost as if he was his own worst enemy and if possible he would be his team’s enemy as well.

The other teams fared much better. Liz had Michael and she was willing to accept direction from the very beginning. Michael knew about international food and that’s good because that’s what they were cooking. The teams had to cook several international dishes in less than two hours. Liz didn’t know most of those dishes and so she could rely on her partner. Like she was supposed to in such a challenge. Sarah also got lucky because she was paired with Noah and they preplanned everything to the last dish. This gave Sarah parameters and that’s what she enjoys. Then there was Sam. Sam was paired up Shari and Nick did this because he thought the fact they’re both soft-spoken would sink them. And that wasn’t what hurt them.

They didn’t manage their time appropriately. They wasted a bunch of it on meal prep and then they had to cut the seventh dish from their menu. The seventh dish was something they were supposed to come up with and so in a way it was a sign of their partnership. Each team came up with a unique dish as their seventh and not all of them could go through with their dish. The first team called up was Michael and Liz. Their communication broke down halfway and so they lost out on finesse. They also tried to serve rough dough as well as raw fish. And not even their meatballs were done right because Liz failed to add an egg into the mixture and so the meatballs were had nothing giving it moisture.

Noah and Sarah were called next. Their partnership held up the whole way and they had their seventh dish. It all tasted good and so the only thing the judges would have asked for was perhaps sauce. The next team, on the other hand, was Subha and Dorian. The people watching on called this particular partnership brutal and one said it was like watching his parents get divorced. It was a mess because Subha focused on crap rather than what he should have and he didn’t take direction. The only thing he did right was the Indian dish and luckily his mom taught him how to cook that one. Dorian cooked the rest and so the only good part Subha did was that he got all the flavors right. Its why, despite everything, they did an excellent job.

The final team was Sam and Shari. They didn’t get most of it right because they constantly one piece off or they failed to cook it properly and they didn’t have their seventh dish. But still, their worst was better than Liv and Michael. Those two hadn’t gotten anything right because they left it at the last minute and their mistakes triumphed over everyone.

The judges decided to eliminate Liv and Michael tonight because they made too many fundamental errors and Season 10 should be better than that.