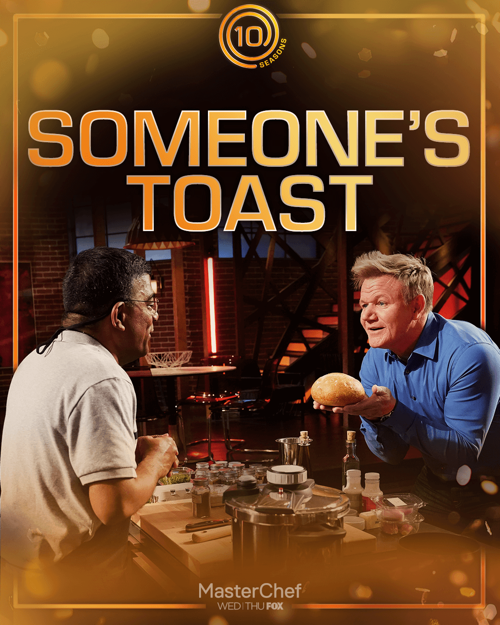 Tonight on FOX Gordon Ramsay’s Masterchef returns with an all-new episode on Thursday, July 25, 2019, season 10 episode 13 called “Someone’s Toast,” and we have your weekly Masterchef recap below. On tonight’s Masterchef episode as per the FOX synopsis, “TIn another mystery box challenge, the home cooks will be forced to rise to the occasion.

The contestants are surprised with a secret ingredient that they must re-invent in two unique dishes: one dish will be savory and the other sweet. With elimination on the line, one home cook will be sliced out of the competition. Watch it all unfold in the all-new “Someone’s Toast” episode of MASTERCHEF.”

Time for the Mystery Box Challenge and today is the day that the judges are going to top it all off. Under the box, there is simply a single loaf of sourdough bread. The home cooks have to make one entrée and one dessert with the bread. They have complete access to the Masterchef pantry. The judges are looking for two elegant dishes, a sandwich is not going to do it and if they prepare toast, they are going to be toast.

Nick is up first, he made Bread & Potato Gnocchi with Uni Butter & Smoked Egg Yolk, and Brioche Strawberry Shortcake with Basil Butter. Aaron says the gnocchi is a little dense, but the flavor is good. Nick says his desert is not up to par. Gordon says that he is right, but he likes his ambition.

Dorian made Pan-Fried Pork Chop with Stuffing and Honey-Glazed Carrots, and Turtle Bread Pudding with Sweet Cream. Gordon says the pork chop is perfection, spot on. Dorian is speechless. Joe says aside from the excellent flavors, it is excellent. The dessert is really rich, Gordon says OMG, delicious – if she makes it to the finals, but that dessert on it. Joe says he drops his spoon to Dorian for that amazing dessert and she knows it is the highest compliment.

Wuta made Creamy Cajun Tomato Soup in a Sourdough Bread Bowl, and Tarte Tatin with Bread & Bananas. Wuta is very happy to have made a vegetarian dish. Joe says the seasoning is masterful. Gordon says he is very relaxed cooking with no protein. All the judges loved his desert.

Noah made Chicken Piccata with Roasted Pepper Grits and Cherry Bread Pudding with Walnuts and Raspberry Anglaise. Gordon says he cooks with heart, not his best dish though. Aaron says he took it to a place that speaks to him.

Jamie made a Pecan-Crusted Red Snapper with Spinach and Caper Sauce, and French Toast with Caramelized Bananas & Pecans. Gordon loves It, it is vibrant and delicious. Aaron loves that he took his time with it, it is amazing. Gordon loves the finesse, good job.

Sarah made Bread & Herb Crusted Halibut with Breadcrumb Gnocchi, and Brioche Bread Pudding with Lavender Infused Raspberry Jam. Gordon says the fish dish looks like it is missing something. Sarah says she didn’t have time to put the sauce on the plate. They liked the fish, the desert is rich and delicious, very flavorful.

Bri made French Onion Soup with Gruyere Cheese in a Sourdough Bread Bowl, and Blackberry Clafoutis with Brioche & Pistachio Crumble. Aaron wants to know how the sixty minutes were used to her advantage. Gordon says these dishes are not her. Bri started crying. The soup soaked into the bread. Joe tells her that her dish is not season 10 worthy. Gordon says the desert is an insult to France. Gordon says that he is shocked that she sabotaged her own success.

Sam made Dill-Crusted Snapper with Butter Sauce and Romesco Potatoes, and a Cardamom-Spiced Bread Pudding. Gordon says the potatoes smell incredible, the fish is overcooked. The highlight was the potatoes, but it is not a potato challenge. Joe says that at this point in the completion, they need to see more from him. Joe says that all he tastes is honey in the desert.

Subha made Chicken Mulligatawny Soup in a Bread Bowl, and Rose & Safron Bread Pudding. Joe says he has never eaten anything like this. Gordon says he is calling his mom and telling her he wants a dish like this. Joe says that he appreciates his finesse. Joe says it is the worse looking and tasting desserts, it is so spicy. Gordon asks him why the desert has to be so spicy. The judges are choking. Gordon says the desert has to come with a hazardness warning sign.

The judges announce that one home cook stood out, Dorian; she is safe and goes up to the balcony. Sam, Bri, and Renee are in the bottom three, the rest of the home cooks are sent up to the balcony. Renee and Bri are safe, Sam is sent home, his journey on Masterchef is over.