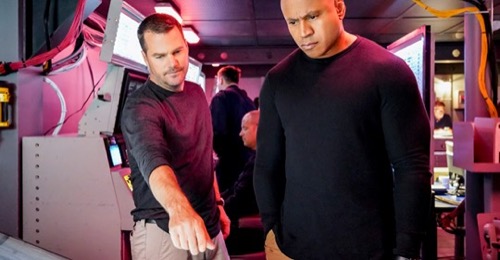 So make sure to bookmark this spot and come back between 10:00 PM – 11:00 PM ET for our NCIS: Los Angeles recap. While you wait for the recap make sure to check out all our NCIS recaps, spoilers, news & more, right here!

There was a killer onboard the USS Allegiance. Special Agent Afloat Brian Lee was killed after the ship left dock and that meant the killer had to still be near, but there was also the question of why? Lee could have gotten close in another investigation or he could have been killed to silence him. He was stabbed several times and that screams personal. Someone less familiar with him wouldn’t necessarily have gotten so close to the victim and an assassin would have at least made the man’s death look accidental. Sam and Callen said that they would try to find out what happened on the ship and they asked for their team to help narrow down the field. Eric would have liked to help and he couldn’t. He was used to working with Nell and Nell was off seeing to her sick mother. She wasn’t going to come back anytime soon and so Hetty gave Eric a new partner.

NCIS Special Agent Jasmine Garcia was assigned to the team. She was smart and she wasn’t going to take being sidelined because Eric thought he knew better. He didn’t! Garcia told him to put his ego aside because they had a case to work and she created an app that made things a lot easier. The app cross-referenced anyone that was acting suspiciously on the ship and who played Viking War Blood recently. The game was a cover for foreign operatives to talk to each other without alerting anyone and it helped the team find Petty Officer Second Class Vincent Davis. Davis was a Chechen as well and he took his wife’s maiden name. This followed the same pattern as it did with Baird and so the boys went to go talk to him, but Davis tried to run. He was on a ship and tried to run. It was pretty laughable because of course, he didn’t get anywhere.

Sam and Callen got David and they put in a room for interrogation. They tried to ask Davis about his past and his motives, but he tried to claim that he didn’t want to be discriminated against for being a Muslim and so Sam put him straight. Sam was a proud Muslim man himself and he never took steps to hide his faith. Sam knew that Davis was lying about changing his name and neither he nor Callen could get the man to open up before they received a call from Garcia. Garcia said that cameras put Davis on the other side of the ship when Lee was killed and so he couldn’t have done it. It didn’t mean he was in the clear for everything else and so the team went with the theory that Davis had help. There was a second operative on the ship and it was going to take forever for the guys to question everyone.

The XO needed to bring in the SEALs. With the help from the SEALs as a backup, the guys began rounding up everyone on the ship they suspected was a spy and the team on the land had also found something. Kensi and Deeks found Olivia Baird. Baird tried to claim she knew nothing and it wasn’t until pressed over her Russian connections that her accent came back. She admitted to being a Russian spy and added that something went wrong with missing. Baird wouldn’t say anything else without her handler’s permission and the handler wasn’t going to give it. The Russian ambassador could only be blackmailed over his sexual proclivities by so much. He did say that the Chechens betrayed them. It turns out that the Russians recruited these men and paid them to infiltrate several branches of the military only for the Chechens to betray by siding with their Muslim brethren like ISIS.

Sam and Callen were filled in and they went back to Davis with what they knew. They told Davis that his days were numbered if he didn’t help, but he already did. Davis was talking to Lee about defecting and then Lee was killed. The only other man that knew what Davis was doing was Sabatino. The CIA knew about this plan and they used Davis to get information. Sabatino then got off in Iraq and so there’s just a bigger picture than simply a few spies changing allegiance. The team was trying to figure that out when they were alerted that Iran was claiming Israel and Saudi Arabia had kidnapped two of their nuclear physicists. Iran was using that as an excuse to go to war and so the team had to find Sabatino.

Kensi and Deeks went after him in Iraq. They eventually found him in the middle of trying to stop WWIII and so the team needed some clarification. They demanded to know what Sabatino and so he filled them in. He said that the Chechens began working with ISIS because ISIS was losing ground in Syria. It was almost over them and they desperately need a second chance at creating the caliphate. So they brought in the Chechens and they stole ballistics. They were going to use ballistics to fire on Israel and Iran and claim the two countries were attacking each other. They also created the fake video of Iran taking umbrage with Israel to play into this narrative. ISIS was counting on the countries shooting first and asking questions second. And so the only way to stop the war was to use the secret weapon.

There had been a second Chechen to side with the CIA. This guy went missing with his American handler in Iraq and unfortunately only they could stop the oncoming war. They had evidence of what ISIS had been doing and they could prove that no country was involved, but Sabatino needed to find them and he last heard that ISIS had sent a kill team after him. No sooner did he tell Kensi and Deeks that his life was in danger that ISIS made their move.

They came after the CIA compound and tried to bomb Sabatino out.

Meanwhile back on the ship, the last Chechen agent had found his way to the nukes and began bombing the Middle East in the hope of creating a devastating war.