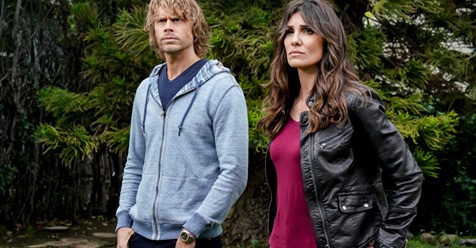 So make sure to bookmark this spot and come back between 10:00 PM – 11:00 PM ET for our NCIS: Los Angeles recap. While you wait for the recap make sure to check out all our NCIS recaps, spoilers, news & more, right here!

A Park Ranger found a body when she was out on patrol. The body was that of former Marine Elle Simms and this marine didn’t take to retirement easily. Her ex-husband said she needed the rush she would get overseas and so she tried out plenty of jobs, but ultimately she wasn’t getting the high she was looking for. Simms was an addict and when she wasn’t using drugs and alcohol she was looking to reenlist in any way she could. She recently joined a DEA Task Force and it had been her colleagues that reported her for going MIA. Her ex-husband has reported her going missing in the past and each time she would show up. And so he got tired of being the boy that cried wolf and he left Simms months ago.

The ex had heard that Simms went missing again and he hoped that it would lead to rock bottom, but someone got to her first. Simms was missing teeth and her fingers. She was either tortured first and then killed or she was killed and her killer took the additional step of making things hard with forensics. It wouldn’t matter in the long run because in both scenarios the killer had to be a professional. Her body was even disposed of by someone in the know and so that begged the question of why? Some on the team thought it could have been the ex-husband and that he took revenge for Simms wanting the life more than she wanted him while the techies found something a little more credible.

Nell found evidence that Simms was investigating a link between Syria and the United States. She was pursuing this lead on her own and so everyone wanted to know why she hadn’t brought it to her superiors. Only she had. Simms went to her boss who was also a friend and she told him what she suspected, but he didn’t believe her. Her known drug use was out in the open and so her friend thought she was punching ghosts. Or in other words, seeing problems that weren’t there. It was believed that she had created a problem and she was asked to prove it. Simms was left offended and she never did show anyone her proof. Her boss had even checked the database afterward and he saw no signs of ISIS being in the US.

The terrorist organization hadn’t even conquered Syria yet and so why they turn their sights on another country. Anyways, the database was checked and her superiors found nothing. The team knew that Simms didn’t let it go at that and so they looked into who else she might have been in contact with. They found someone in the National Guard that had been her friend and when they went to go talk to the man they were met with resistance. Neither the guy nor his wife wanted to reveal where he was or what he knew and when the team went to go around back to see if they could catch him they ran into a bomb. A bomb had been planted in the backyard shed and it was pure luck that it didn’t injure anyone on the team.

The fires were put out and the scene was checked over, but it was clear that Michael Baird had something to hide and so everyone wondered if he killed himself to escape punishment. There were no signs of a remote detonation or a trip wire or even a cell phone device. It had seemed like Baird killed himself and the only one that was fighting that estimation was his wife Olivia. His wife said that he would never kill himself and so the team investigated how he was able to do it. There was an explosive permit left behind that had been in someone else’s name and once they had seen that they went to go talk to Baird’s accomplice, but the man fired at them the moment they announced they were federal agents.

The team was forced to return fire and they ended up killing the guy, but they later got an emergency warrant and so that made everything okay. They got to go through Madison’s things and they all thought it odd that the man was addicted to his gaming computer. He didn’t have any other computer and so Eric checked why a man like Madison would playing Viking War blood. It turns out the deceased was using the game to hide his communications with two more accomplices. Another thing that because clear was that this terrorist cell (whether it was ISIS or not) were planning something big. Eric saw them mentioned the USS Allegiance and that was the largest aircraft carrier in their whole fleet. It also carrier nuclear weapons and so this cell was planning on a mass casualty event that no one knew about.

But what was the hold-up? The terrorists had killed Simms weeks ago and Baird already had an airtight alibi for her death yet he kills himself and destroys evidence in such a rash way that it looks like it was done on a whim. The terrorist was already speaking to someone with access to the aircraft and so why didn’t they use the explosives that killed Baird on the actual vessel. There was just something about all of this that made the team question the validity and so things didn’t begin to clear until they heard that Pavel Volkoff had been in contact with the Baird family. Both Michael and Olivia had changed their names and Michael at least was born in the Soviet Union before it was born.

Meaning this may not have anything to do with ISIS. It could be the Russians portraying themselves as Middle Eastern to hide their actions and so Sam and Callen went to go join the crew of the USS Allegiance, but they found a murdered sailor and realized that one of the accomplices could have killed the other.