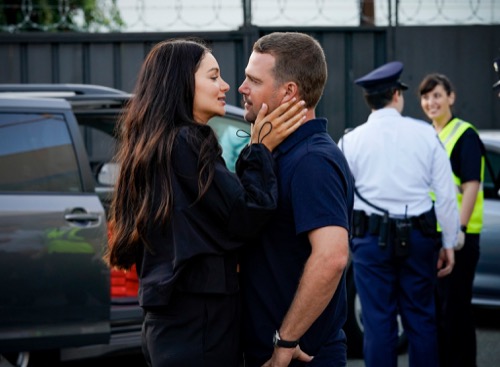 The team faced multiples cases worldwide. Callen and Sam were still in Tel Aviv. They were working with Callen’s Eliana on an investigation for Mossad and it didn’t look like they were coming back stateside anytime soon. In fact, the pair seemed to be adjusting fairly well to their new environment. They weren’t thinking about their team and neither had any idea how much their friends were struggling. The team was abruptly left short-staffed when both Deeks and Eric were pulled into something else.

Eric was off doing side work. He couldn’t discuss it and Nell hasn’t heard from him in a while. She was growing concerned when the team another person. This time it was Deeks. Deeks was pulled into an LAPD meeting and so he was also going to be gone. With both men out of commission, it was really up to Kensi and Nell to investigate Liam Henderson’s death. Henderson was killed point-blank after he stopped a robbery at a bodega and the thief claims to have no knowledge of this shooter. It seems both people were doing their own thing that night.

Only Henderson was known to NCIS. He was the bodyguard of the late Rick Dotson and Dotson was notable because he was an arms dealer. He was actually a very dangerous man when he was alive. He was even killed by a vigilante that wanted to bring Dotson’s reign of terror to an end and then the vigilante committed suicide by cop. That was when the guy pushed the police into killing him because he wanted to die. This vigilante did it because he claimed his mission was over with Dotson’s death and so now everyone was wondering if he had a partner all along.

If so then it could be this partner that was responsible for Henderson’s death. Henderson was executed and so were several other people connected to Dotson’s security detail. This could be because this second vigilante wanted to finish what he started or it could be that there was a rival in the arms dealing game that wanted to make sure none of Dotson’s people could resurrect his business. Nell did her research. She later found out that a man named Colby Talbert did try to take over Dotson’s territory back in the day and that Dotson had had to fight him off.

So, Colby was a suspect. The team couldn’t dismiss their second theory and so they also carried into an investigation into whether or not the vigilante acted alone. There was just one problem with this investigation. Kensi couldn’t do it by herself and she ended up turning towards their old friend Lance Hamilton for help. The two of them went looking for anyone who was still alive from Dotson’s crew. They learned of Rick Takada, who was still alive, and they also talked to Dotson’s girlfriend Karen.

Karen claimed not to know what was going on. She was paranoid enough about her own safety that finding out about Henderson had pushed her over the edge. Karen had her team double-check all security measures and she was almost too nervous to talk to Kensi and Hamilton. They literally had to deal with her with kid gloves. They gently talked to Karen about the old days and she didn’t know how bad it was with Colby. She did, however, use his first name which indicated she might have known him personally.

The team didn’t push on that instance. They had heard Rick Takada resurfaced and he was their chief concern. Especially as his life was in danger. Rick was the last person alive and it seems he recognized the threat. He went to a cheap motel where he hid in a room surrounded by weapons. Kensi and Hamilton thought they would have to pry Rick out of his room. They thought the man would be so scared that he wouldn’t know to trust them and so it came as a nasty surprise when they found Rick dead.

Rick had been assassinated. He was the last of Dotson’s bodyguards and he was also the only one the team could have questioned. They wanted to know if the old security crew had taken over Dotson’s business. It could have confirmed if Colby was behind these killings. The team was still in the dark about that and so they chose to focus on what they could do. They used evidence from the scene of the crime to trace it back to their killer. And they found their killer hiding out in a closed pharmacy.

Their killer put up a fight when he was cornered. He forced Kensi to wing him and so he was getting medical attention while she was searching his effects. It turns out their killer was an Ex-royal commando. Just like the men, Karen hired to protect her. Kensi and Hamilton and their new theory suggested that Karen was the one to hire this assassin to kill Dotson’s bodyguards. These same men were responsible for Dotson and he still died on their watch. So, Karen could have killed them out of revenge.

It made sense that Karen was behind this. She hadn’t fled when the team told her that someone was hunting down Dotson’s men and, despite her scared little bird act, she appears to have taken over her boyfriend’s arms dealing. Almost as if she’s been doing this from the beginning. The team had found plenty of evidence. They found out that Karen went by a different name and that she travels with a Canadian passport. She traveled all over the world under this other name. She also seems to have been the actual arms dealer and so Karen played the team.

Dotson was just the fall guy. Karen was the real mastermind and she eliminated Dotson’s bodyguards because they probably knew too much. The team had found evidence to back all of this up. They just had to arrest her and unfortunately, she put up a fight. Karen’s team nearly killed Kensi and Hamilton. They were only able to overwhelm because of their superior weapons and the fact that they were used to fight against such numbers. Both Kensi and Hamilton got out of the fight alive and they also arrested Karen.

Karen was going to be put away and so Kensi, Nell, and Hamilton all celebrated with drinks afterward.

They had such a great time together. They didn’t even miss their other friends and so it’s a good thing that Callen and Sam were coming back soon. If their secret mission had been any longer, the team would completely have forgotten about them.