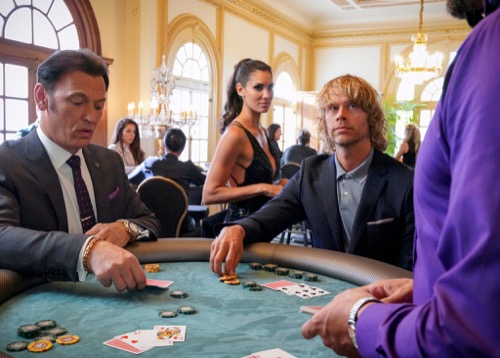 A heist in the UK was soon a problem for NCIS. The guys that pulled off this heist were all British and there had several contacts in the states. They were in league with someone named Andy Green. Green was an arms dealer and the guys needed him to sell a weapons system. The system could supposedly destroy an armored truck at distance. NCIS was given a hint this deal was going down so they moved in to arrest Ricky and Frankie and it turns out they made a mistake. The boys may have pulled off the heist and gotten in bed with an arms dealer, but it was all for a good reason.

Ricky’s daughter was kidnapped. She was taken and whoever has her had demanded that the guys get Green to sell the weapons system in exchange for the girl. But to do that, the guys had to pay off Andy and so that where the heist came in. Ricky and Frankie robbed a mobster in the UK. They stole the money they needed to bribe Andy and no sooner did they do that they got a message about Ricky’s daughter. The guys were supposed to go pick her up and that’s when they were arrested. They were arrested right before they could collect the girl.

The people that had her had probably seen them getting arrested as well. Therefore, Ricky’s daughter could be anywhere now. The guys didn’t know what to do so they asked for help from the team. It seems they’ve been out of the game for a while now and so this recent heist/rescue had pulled them back into life. The team could see that they were desperate and it didn’t hurt that that times have changed. The team decided to help because they truly did care about getting the girl back, but they also wanted to get the weapons system back as well.

The same terrorist now has both. They have the weapons system and the girl. So, to find him they first had to track down the middleman. Steve McMillian was his name. The guys didn’t know how to find him now with their arrest probably being out there and so the next best thing was to track him down using his weakness. Like his favorite gambling den. They went to a secret gambling den that was run by and for brits. You had to be one to get in and so the team worked on their fake accents. They also received some help from Ricky and Frankie.

Both of whom went along for this little joyride. They were after all the only real brits there and Frankie used to be a card cheat. The team tasked Frankie with looking for other cheats. They also tried getting information on McMillian, but what they later found was upsetting. The guy was apparently dead. He was killed the second he became expendable and Frankie ruined their cover when he began cheating on cards. The mission there was ruined and so the team went back to their old methods.

They brought targets to the boat shed. They questioned them and were getting nowhere when Ricky barged into almost strangling a guy. Ricky had thought the Americans were too soft, but his methods did get answers. He found out his daughter was kidnapped by the North Koreans. He even learned the name of the man in charge and so his brutish ways came in handy. The team now had a name. They ran that name passed their old contacts and sadly they learned the man they were looking for had a sadistic side.

Their contact also gave them an image to work with. Fatima ran the image search and it became two passports. One for Michael Lee and the other for Michael Park. They were the same man and with help from their contact the team learned that “Michael” was probably working on the weapons system as they speak. Fatima tried tracking them down and she located them at a warehouse, but by the time the team found them, the guys were gone and it seems they had been tipped off. Fatima traced the phone call and it led directly back to Ricky.

Ricky had stolen the phone off of Super Fat at the gambling den. He said that he couldn’t trust the team to find his daughter and that’s why he came up with his own plan. He contacted the North Koreans. He tipped them off about the raid because he had made his own deal with them. He offered them their traitor Jennifer Kim back if they give him his daughter. Ricky was willing to give up the team’s North Korean contact because he only cared about getting his daughter back. He didn’t care about the weapons system while the team did.

They were very angry with Ricky when they learned what he did, but they were still willing to help him and so they took their own twist on his plan. They pretended to hand over Jennifer and the truth was they had surrounded the North Koreans. They waited until they saw Ricky’s daughter Angela and that’s when they made their move. They attacked the North Koreans and killed them all. And the only one that was injured, Ricky.

But he was fine. He got his daughter back and that’s all he wanted.

And the team did recover the weapons systems, so they were willing to forgive Ricky for him going behind their back.